Internet users are talking to their phones much more, meaning that brands need to prepare for a hands-free future in digital, according to the annual report from digital guru Mary Meeker.

Every year, Meeker’s State of the Internet presentation is used as an industry touchstone for how much digital technology has influenced media and marketing trends.

Meeker, a current partner at Kleiner Perkins Caufield Byers, delivered her annual at the Code conference in California.

View the full slides below:

Voice commands- the interface of the future?

One of the key trends this year was the move to oral commands asd opposed to swipes and taps.

For example, Baidu has noted a massive recent spike in the number of users using its voice recognition capability to perform search queries.

In addition, pioneering brands such as Domino’s Pizza and Uber have boosted Alexa, the voice assistant that animates Amazon’s Echo. The device now has nearly one thousand “skills,” a substantial leap over last September, when Alexa could do only 14 things.

Another key trend Meeker brought up was mobile ad spend. Google and Facebook make up the vast share of digital advertising in the US. The two companies have staked out a 76 percent share of US Internet ad growth, and that share is rising. 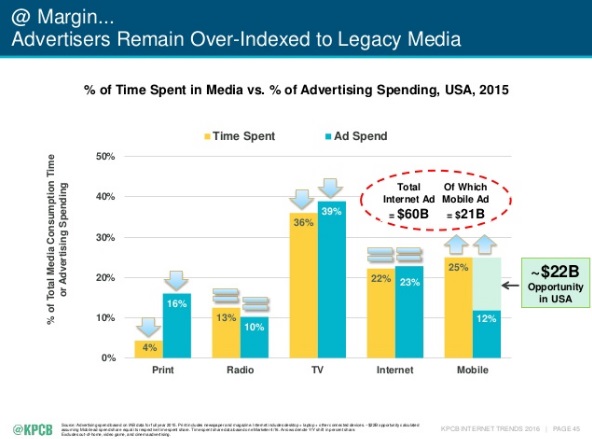 Overall US Internet advertising grew by 20% from 2014 to 2015. That’s mainly owing to mobile ads, which grew 66% year over year, compared to desktop ads, which only grew by 5%.
However, Meeker says advertisers still aren’t advertising on mobile nearly enough. She said they are still committing too many of their dollars to so-called legacy media.

Meeker valued the mobile ad market at $22 billion in the US, pointing to data that shows people spend 25% of their time on mobile devices compared to 36% watching television, 22% using the Internet on their desktops, 13% listening to radio, and 4% reading print.

At the same time, spending on mobile ads only accounts for 12% of the total advertising pie. 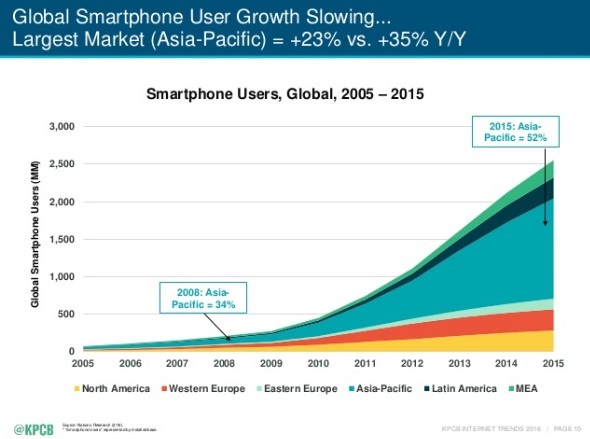 The rise of hyper targeting in social media

Forget geo-targeting, hyper targeting is becoming the driving force for many social media start-ups. Hyper-targetting involves working our consumer’s intent via social media behaviour and tagretting this with the appropriate ads- at nthe right time and in the right place. 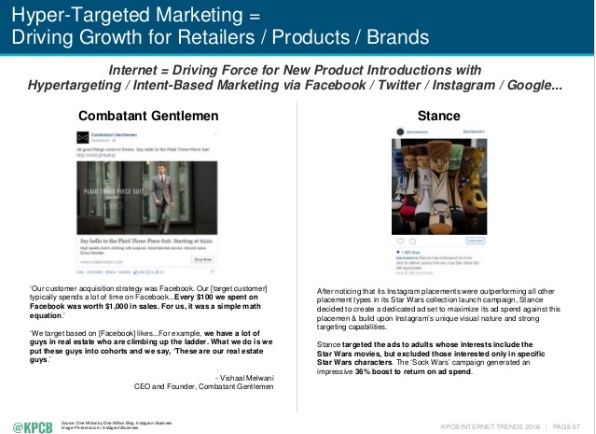 Snapchat is fun… and so are its ads

Snapchat’s sponsored lenses, an ad type that lets brands like Taco Bell or 20th Century Fox pay so users can distort their selfies by putting their face on a taco or transform into a character from “X-Men”. 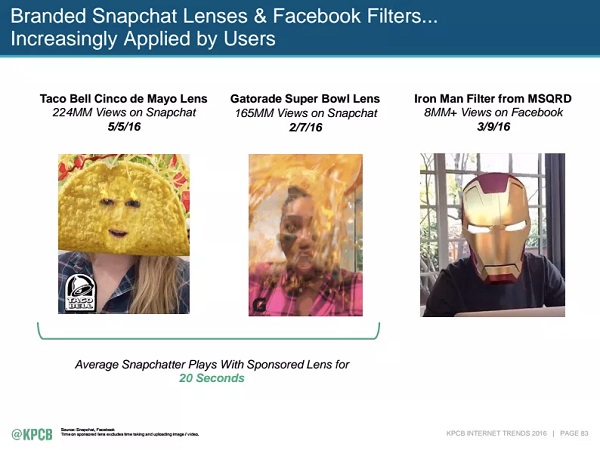 Another chart showed how Snapchat had overtaken Instagram for time spent for US users. 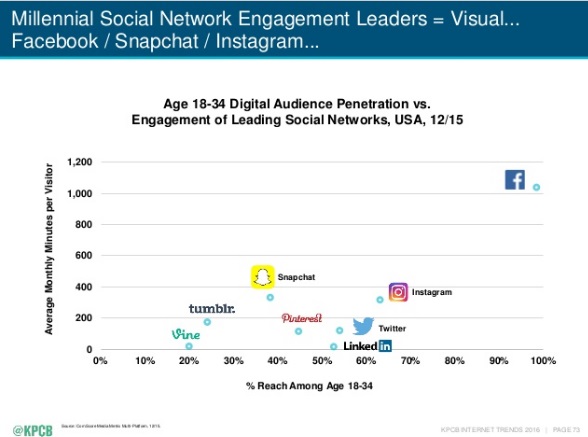 Facebook and Snapchat alone now account for 18 billion video views daily, much of it user-generated content. That shift is putting extreme pressure not just on cable and satellite providers but the entire video ecosystem—content producers, networks, advertisers, agencies and the regulators who still think they call the shots. 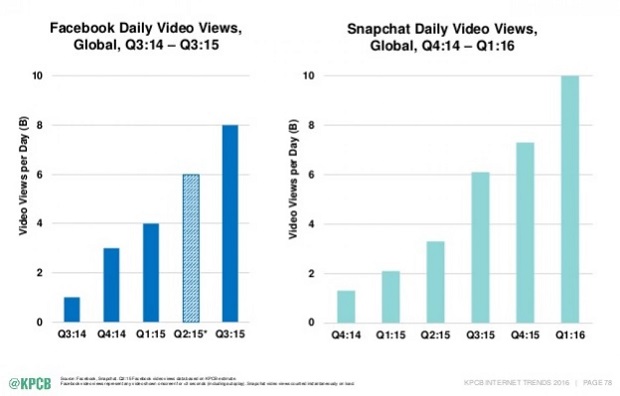 The top 20 Internet companies now have a market value of nearly $3 trillion. Thanks to a long-standing U.S. policy of “permissionless innovation,” over half are American companies, and seven are Chinese — the result of an admittedly very different industrial policy. As Meeker noted in last year’s presentation, none of these companies, with the exception of Apple, even existed in 1995, at the dawn of the Internet age. Every country had a chance—and still does—to incubate its own disruptors. 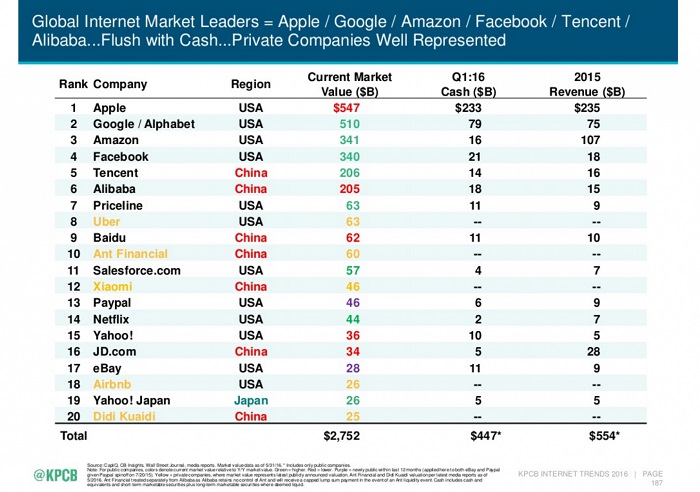 The big trends to watch

Required reading for the technology, media and investment communities, Meeker’s report touches on a number of topics in the digital media space, including the peculiarities of millennials, the rise of messaging applications and social media’s embrace of photographs and video.

View the video presentation in full below:

Some other highlights from the presentation:

⦁ There are now roughly 3 billion global internet users, but user growth is stalling at some 9% year-on-year.

⦁ However, internet use in India is soaring making it now the second-largest market behind China, passing the US, with over 277 million users.

⦁ Smartphone sales are slowing down, as is the yearly growth in the number of smartphone users, down to 21% from 31% last year.

⦁ Internet ad spend in the US has grown by about 20% since last year, reaching $60 billion—two-thirds of that growth has come from an increase in spending on mobile ads.

⦁ The time it takes retailers to get to $100m in online sales is shrinking. It took Nike 14 years from the time its retail site launched, compared to nine years for Lululemon, and just eight years for Under Armour.

⦁ The average Snapchat user engages with sponsored lenses for 20 seconds per session.

⦁ Facebook Live has major brand power: When “Chewbacca mom” mentioned retailer Kohl’s twice in her viral video, the store’s app shot to the top of the downloads chart on the US iOS App Store.

⦁ Over half (55%) of Pinterest users use the site to find products they want to buy.

⦁ Messaging apps are transitioning from simple text tools to communicate with friends to platforms for commerce.

⦁ There are 10 million business accounts on WeChat, and about 80% of all users follow one.

⦁ Generation Y is the first generation to prefer chatting over the web or social media to talk to businesses, rather than over the phone.

⦁ Computer recognition of speech has risen from about 70% to 90% accuracy in the last five years.

⦁ The vast majority (65%) of US smartphone owners now use a voice assistant.

⦁ By 2020, at least 50% of all searches online will be through voice or image search, according to Baidu’s chief scientist Andrew Ng.

⦁ Only about 5% of US Amazon customers own an Amazon Echo, much less than those that own a Fire TV streaming device.

⦁ Self-driving cars will suceed: The average urban US worker spends about 42 hours a year sitting in delays on their commute, and the average person’s car is only in use about 4% of the time.

⦁ Over two-thrids (71%) of the time spent on mobile in China is divided between properties owned by three companies: Tencent, Alibaba, and Baidu.

⦁ Nearly on third (31%) of Chinese WeChat users purchase something from retailers though the chat app.

⦁ China’s sharing economy: About 70% of the 6.3 billion on-demand rides requested around the world in the first quarter of 2016 were requested in China.

⦁ Tradtional brands going digital: There’s been a 263% increase in the last three years of non-technology companies acquiring and investing in tech companies, such as GM buying Cruise Automation, and Fox Sports investing in DraftKings