Most consumers are actually looking for brands and businesses to improve their current digital products and services already in use before jumping on the bandwagon with trends that are generating most buzz in the industry, according to new research.

The survey, carried out by digital agency Code Computerlove as part of its annual trends forecast, found that 38 per cent of consumers polled said they were looking for improvements over new innovations and better integration between the various devices that they use from their digital experience in 2018.

Only 17.7 per cent said they were looking for ‘something they haven’t experienced before’ from their digital experiences in 2018.

The survey also explored consumer appetite for some of 2018’s most talked about digital technologies, and those predicted to be the biggest areas of growth in the coming year.

While 35 per cent of consumers polled said that they had encountered voice driven interactions via the likes of Amazon Alexa / Google Home so far, with 62 per cent rating their experience as good or very good, less than a quarter indicated that they’re interested in using voice assistants to interact with brands and businesses in 2018.

The second most used technology in the poll, mobile payment, is something that 23 per cent of the consumers polled were interested in using more of in 2018. 26 per cent of consumers reported that they’d used mobile payments in 2017 and a massive three quarters said their experience was good or very good.

While people’s experience of virtual reality so far was overwhelmingly good or very good (78 per cent) only 15 per cent are urging brands to use this more in the coming year. 14 per cent have encountered it so far. It was a similar story with augmented reality, with almost identical results.

Commenting on the findings, Louis Georgiou from Code Computerlove says: “None of the five trending consumer technologies we looked at have reached true mass adoption yet, but voice assistants and mobile payments are the closest to becoming mainstream, whilst VR and AR still have the longest way to go.

“Although voice assistants were the most widely used trending tech in 2017, satisfaction levels weren’t brilliant. 33 per cent of those questioned were indifferent and five per cent rated it “bad/very bad”.

“And whilst VR and AR have less adoption so far, those using these technologies were more impressed with their experiences overall.

“The findings around chatbots were particularly interesting. Only a fifth of those questioned had encountered a chatbot. This echoes similar reports that we’ve read during the year, despite this being an area that we know brands are investing in and adopting. This disconnect perhaps suggests that either customers don’t know they’re speaking to chatbots or the ones already in the market are not being met. Only nine per cent are interested in more chatbot technology in the coming year.”

Louis continued: “Our survey last year found that mobile payments were the most sought-after technology, with 32.1 per cent of consumers saying they wanted to use this tech in 2017. That percentage has dropped quite significantly this year to 23 per cent, whilst voice assistants have come to the fore with nearly a quarter of consumers keen to use smart speakers in 2018.

“Meanwhile, the number expressing an interest in using VR has dropped from 24 per cent to 15 per cent; perhaps a sign that this technology hasn’t yet lived up to a brand’s expectation in terms of a digital interface that will drive greater consumer experience, and that excitement is temporarily ebbing away. “

Tony McBeth from Code Computerlove also commented: “Similarly, the AR market isn’t mature yet and consumer appetite is still low. It’s like when the iPhone first came out, it was very exciting but developers didn’t know what to do with the new technology. As a result there was a huge amount of experimentation, with brands and developers making things just because they could. This led to lots of apps like the iPint, apps that made fart noises and game apps – not the most innovative or useful use of the App Store. But, it took this experimentation period to mature the market and as this happened brands could really begin to benefit from the enhanced tools and create a engaging customer experience.”

Code Computerlove also gathered data from Google looking at the number of searches for these topics compared. This showed that voice assistants* was by far the most searched for term followed by VR. 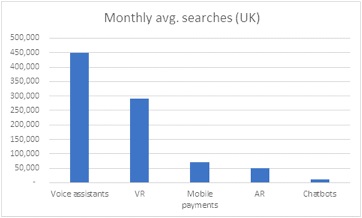 Concluding, Louis said: “Brands and businesses looking to develop voice Skills and search have the most receptive audience it seems, and conversational UI is undoubtedly an exciting space, but the technology and application needs to be right for the service and brand – and not something that is undertaken at the expense of getting existing digital services and experiences right.

“Our advice is to approach this work as additional experimentation, learn fast and learn from real users to find if it’s the right solution for your customers – and, in fact if the answer is “no” recognise this before large scale investment.

“So maybe the real trend in 2018 will be a shift to continuous delivery coupled with discovery projects. Taking an iterative approach means only building things that work – and that real users respond positively to – as every iteration can be measured and the user data then determines the development path. Discovery projects are already being adopted by some of the larger brands – effectively saving thousands of pounds in wasted delivery time, had they commissioned a full build.