Donald Trump’s email marketing campaign is outperforming Hillary Clinton’s by 12.9 points to 11.0 across six separate marketing parameters, fuelling the surge in small-dollar donations to the Republican candidate, according to new research.

The research conducted by email service provider, Mailjet, analysed emails sent by both campaign teams over the course of the last two months, including those sent at the first and second debate. Despite topping out overall, Trump’s overall score of 48% highlights significant shortcomings in areas such as;

Of course, today marks the 3rd presidential debate and whilst the televised event might appear to be swaying public opinion in favour of the Clinton campaign, particularly low scores in the personalisation of emails (1.3) and call-to-actions (2.0) may well be playing into wider campaign stagnation when it comes to smaller, independent donations.

By contrast, back when Obama was in the running, his approach to email marketing was seen as the stuff of legend within the marketing industry.

Trump campaign emails outperform the Clinton campaign by 12.9 points to 11.0 across six separate marketing parameters
However, with a possible 27 points up for grabs, low scores across the board indicate a huge missed opportunity for both nominees.

In the study carried out by marketing experts, analysis of the email campaigns of the leading presidential candidates showed that Donald Trump tops out on three of the six parameters measured.

However, the Republican candidate managed just 12.9 points out of a possible 27 overall to bag pole position, low scores across the board indicating a huge missed opportunity for both nominees.

The research analysed emails sent by Donald Trump and Hillary Clinton’s campaign teams over the course of the last two months, including communications around the first and second debate, and scored the emails according to a range of metrics including design best practices, personalisation, subject line, cross-channel marketing and the creativity of the content 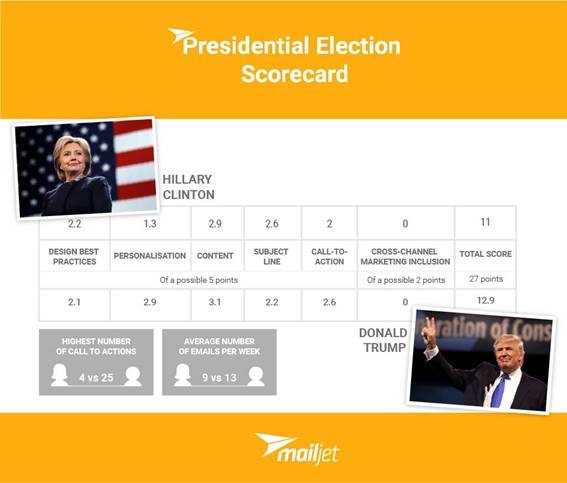 Given Trump’s well publicised achievements in winning small-dollar donations, becoming the most successful Grand Old Party nominee for donations under $200 in history, a score of 48% highlights significant shortcomings in areas such as design, content and the cross-device compatibility of emails. These have been compensated for by a clear focus around personalisation and attention-grabbing subject lines, which earned him 2.9 and 3.1 (out of a possible 5) respectively.

Josie Scotchmer, UK marketing manager at Mailjet, comments; “The Trump campaign provokes a sense of collaboration, regularly asking for opinions and feedback and a small percentage of his subject lines are personalised. As well as a higher email frequency (13 per week to Hillary’s 9), the content complements the message, as he’s asking subscribers to invest in the future of America by donating to his campaign – by donating to Trump Pence you are supporting the cause and joining a club, one in which you can opt-in for yard signs and purchase merchandise.”

Whilst the presidential debates might appear to be swaying public opinion in favour of the Clinton campaign, particularly low scores in the personalisation of emails (1.3) and call-to-actions (2.0) may well be playing into wider campaign stagnation when it comes to smaller, independent donations.

Both campaigns fall short in design and cross-device compatibility analysis. When it comes to design, both Trump and Clinton campaigns remain frugal with images, graphics and interactive elements, resulting in scores of 2.1 and 2.2 respectively. Cross-device compatibility, of particular importance in engaging “on the go” working audiences, has so far received no investment from either campaign, with both campaigns offering supporters more traditional SMS updates.

Whilst it may not be the most technically advanced campaign, Trump wins back points around his use of the call-to-action. Whilst both campaigns stuck to an average or one or two calls to action in email communications, the Trump campaign bundles donation amounts together in one-off emails to manage a staggering 25 call-to-actions in one communication alone.

Analysis revealed a crucial under-investment in personalisation from the Clinton campaign, which scored 55% lower than Trump emails with basic errors such as using ‘Friend’ in place of the recipient’s name detracting from the overall quality of engagement. By contrast, on average 27% of Trump’s weekly emails use the area code and previous donation history to deliver a more tailored experience, calling on subscribers to make more campaign noise in their locality or take advantage of limited time opportunities to double their donation amount.

A sense of urgency

A prominent tactic employed by the Trump campaign involves creating a sense of urgency. Per week, 40% of Trump emails reference the number of days left till the election. This is further augmented by use of emphatic subject lines such as ‘We’re Being Overrun’ and ‘I’m fighting for YOU’, which give him a small but notable 7% edge over Clinton in this parameter too.

Josie continues; “Following Obama’s election we saw numerous commentaries published about the contribution of email to the successful campaign. What’s fascinating is that now the Republican candidate, who has been called out by the Clinton campaign for only seeing large donations from anonymous donors, has in fact invested more heavily in delivering engaging messages to its support base.

In contrast to Obama however, Trump’s message also evokes a rather strong sense of fear. There is very much a feeling of the impending deadline (“60 days to go…”) and a constant reminder that Clinton cannot be trusted with the responsibility. There is a sense of urgency to make your contribution before it’s too late. Concise content and clear calls to action allow for a smooth conversion path.”

A team of marketing experts analysed emails sent by the two leading presidential candidates in the US between 1st September and 19th October 2016. Each email was individually scored according to how well it met the below criteria, (scoring system: 5 = best possible score, 0 = worst possible score) the average result was then calculated for each candidate.

● Design best practices – email is viewed on a desktop, mobile and tablet device and scored according to whether it is responsive and how well the design works across formats
● Personalisation – any evidence of changed fields or gender-bias for example
● Subject line – optimum length, word inclusion, personal,
● Cross-channel marketing inclusion – social media buttons, directing to app or website content
● Creative impact of content – format, appeal, interactivity, tone, strong brand personality