UK viewers are only half as likely as viewers globally to “cord cut” in favour of online services, suggesting the threat posed to the likes of Sky and Virgin from online subscription services such as Netflix and Amazon is rather overplayed, according to new data.

The study, from Neilsen, indicates that nearly seven in 10 (69%) Britons online now report their household pays a subscription to watch live broadcast or on-demand programming- but it’s more about ‘cord-shaving’ rather than ‘cord-cutting’.

Nielsen’s Global Video-on-Demand Report suggests that the most popular TV subscription format in the UK is satellite (e.g. Sky), cited by 37% of respondents. Cable (e.g. Virgin and BT) is the next most popular format (24%), narrowly ahead of VOD (or online service) providers (20%) such as Netflix and Amazon. British take-up of VOD providers is below the global average (26%).

Further encouraging news for satellite and cable providers is that British subscribers are only half as likely (15%) as the global average (32%) to be planning “cord cutting” — replacing their satellite/cable contract with an online service.

“The increasing popularity of online-only TV services will continue to put pressure on the likes of Sky and Virgin, but a wholesale replacement of these traditional subscription players is unlikely,” says Nielsen executive vice president of digital for Europe, Terrie Brennan. “For most UK viewers, online VOD and traditional subscription services are complementary, so we’re more likely to see “cord shaving” – consumers choosing slimmer subscription packages from the traditional players, rather than cancelling them outright.”

Nielsen’s Global Video-on-Demand Report, which polled more than 30,000 online respondents in 61 countries, reveals only half (51%) of Britons online watch some form of VOD programming (be it long- or short-form content) compared to 65% of respondents globally.

Among British VOD viewers, 35% watch VOD at least once a day, compared to 43% globally.
The type of content viewed in the UK using on-demand services contrasts markedly with that viewed in most other parts of the world. Britons are more likely to watch TV programmes (74%) on-demand than films (64%). Whereas, globally, many more people use VOD to watch films (80%) than TV programmes (50%). The contrast is similar across Europe (77% vs. 39%).
Type of VOD content watched. 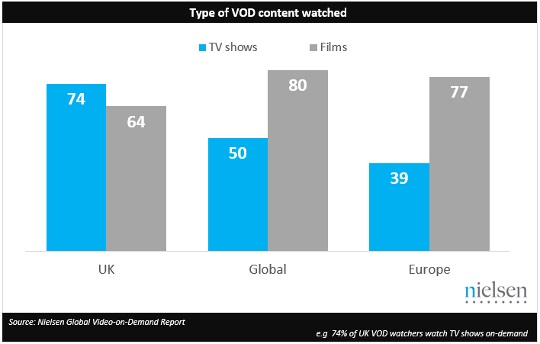 Brennan concludes: “In Britain, the cord-cutting wolf is being kept from the door by a combination of a relatively smaller appetite for on-demand content and traditional pay TV’s superior content library in terms of live sports and the earlier availability of premium TV series and films.”

About the Global Survey

The findings in this survey are based on respondents with online access in 61 countries (unless otherwise noted). While an online survey methodology allows for tremendous scale and global reach, it provides a perspective only on the habits of existing Internet users, not total populations—something particularly relevant when reporting an activity such as watching video-on-demand. In developing markets where online penetration is lower, audiences may be younger and more affluent than the general population of that country. In addition, survey responses are based on claimed behavior rather than actual metered data. Cultural differences in reporting sentiment are likely factors in the outlook across countries. The reported results do not attempt to control or correct for these differences; therefore, caution should be exercised when comparing across countries and regions, particularly across regional boundaries.