Snapchat has seen strong increases in both usage and revenue throughout the first quarter of 2021 as the social media pioneer looks to take on larger rivals Instagram and TikTok.

Snapchat is now being used by 280 million people every day, a 22% increase in year-over-year performance, and the app’s biggest increase in its YoY usage growth in more than 3 years

Snap highlighted the growth of its TikTok-like ‘Spotlight’, which, in addition to being a feed of short video clips, also provides cash incentives – up to $1 million per day – for the best, most engaging Spotlight shorts.

Several creators have made big money from the option, and that’s likely helped to improve overall take-up of the option.

“In March, over 125 million Snapchatters used Spotlight, our newest platform surfacing the most entertaining Snaps from our community. We also launched Spotlight in three new countries – India, Mexico, and Brazil – making it live in a total of 14 countries.” 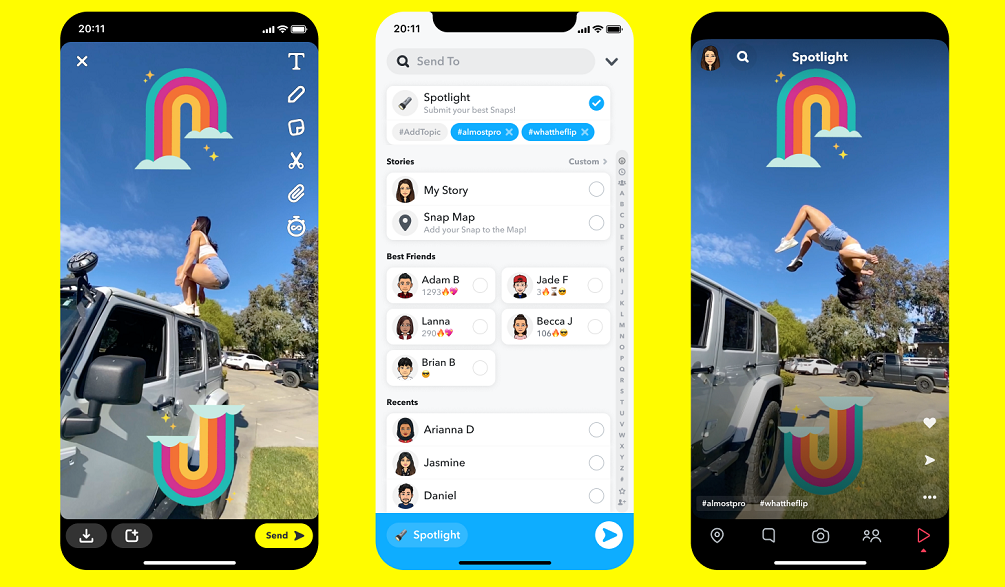 While Snapchat usage increased in all regions, the app saw its biggest growth in the ‘Rest of World’ segment, which is largely due to the company’s ongoing investment in more localized content and improved language support options.

Snap has seen particularly strong growth in India, with its Android update, rolled out back in 2019, playing a key role in boosting Indian user uptake (Android is the most popular OS, by far, in the Indian market).

Snapchat reports that for the first time in Q1, the majority of its daily users were on the Android version of the app.

Snapchat also launched its first Snap Original for the Indian market in the quarter, with a local version of ‘Phone Swap’. The social mmedia app now has over 60 million users in the Indian market, closing in on its biggest usage sectors.

Snapchat’s also seeing increased engagement with its AR tools, with the number of Snapchatters engaging with its AR Lenses daily growing more than 40% year-over-year. That looks set to become an increasingly important focus for the app, with reports that Snap is also working on a new, fully AR-enabled version of its Spectacles device.

Aaron Goldman, CMO at ad tech platform Mediaocean, said: “Snap is off to a great start in 2021. Brands using the Mediaocean closed ecosystems optimization solution (formerly known as Scope by 4C) increased their ad spend on Snap by at least 60% each week in Q1 compared to the same period last year. The combination of deeply-engaged audiences and closed-loop targeting make for a winning formula, especially as the industry reduces its reliance on cookies. As the light at the end of the tunnel becomes visible post-pandemic, Snap is well-positioned with its mix of tools for digital and real-world interaction.

Joshua Gornell, Director of Paid Social at MediaCom, said: “As night follows day, advertising revenue will follow consumption habits and Snap’s continued rise and better-than-expected quarterly results is reflective of Snapchat’s continued growth. Despite often being perceived as a platform for “kids”, 10% of UK adults use Snapchat at least once a day, with 47% of users aged between 25-44; the core demographic for many brands. The significant improvements Snapchat has made to its measurement offerings has meant brands are able to validate and understand brand impact, scaling accordingly. As audiences and the number of potential users to impact has scaled simultaneously, there is an even greater upside.

“During the pandemic brands were forced to find different ways for users to shop. Snapchat lenses, one of the most advanced Augmented Reality solutions in the market, offered this; allowing users to trial and try-on products without being in the physical environment. This was a unique offering as social commerce rapidly grew and no doubt contributed to the latest jump in DAUs, which reflects their strong position in the market.

“With social commerce showing no signs of slowing and significant future revenue opportunities arising, Snap will inevitably look to build upon its already strong direct response solutions, embedding shopping features in both organic and paid offerings, and pushing its brand profile beta out of testing as soon as possible.”

Yuval Ben-Itzhak, President, Socialbakers (Socialbakers is an Astute company), said: “Snap’s strong results show us that the platform is not only continuing its reign as the app of choice for Gen-Z, but is also a go-to for brands wanting to engage consumers in a fun, entertaining way. While rival platforms like Facebook and YouTube offer similar camera technologies, they haven’t been able to capitalise on them in the same way as Snap. This is partly down to perception – users see Snapchat as the place for fun, visual, real-time content – but it’s also down to Snap’s relentless focus on innovation.

“Snap has come a long way since it first introduced advertising to the platform. At first, brands were experimenting and weren’t sure about the value in reaching such young audiences, but this continuous innovation has paid off – now, brands are getting the engagement they need in ways unique to Snapchat. But a focus on innovating for advertising will only get them so far. Now, Snap is at a critical point: it must pivot towards social commerce to continue its winning revenue-generating streak. Its recent acquisition of Berlin startup Fit Analytics is testament to this. Snap is known for its powerful features around the camera, so the synergy with Fit Analytics is clear. While it will take some time for Snap to figure out how best to incorporate its sizing technologies into the platform, and for this to diversify its revenue streams, it’s a sign that the future is bright for Snap – a future driven by social commerce.

“That said, it won’t be an easy road to social commerce success for Snap. It’s a stretch from the messaging experience that Snapchat’s core users are accustomed to – where dog filters and single lines of text are the norm – as social media users find it hard to use apps for more than one purpose. But at the end of the day, social media is all about creating new experiences – and Snap certainly paves the way on this.”