Amazon has retained loyal fanbase in 2020, although an increasing number of consumers report not feeling loyal enough to name any brand as their favourite, according to new research.

The study, from the Data & Marketing Association’s (DMA) found Amazon turned out to be the most mentioned brand when consumers were asked who their favourite brands are, with 15% of consumers naming it, followed by John Lewis (4%), Sainsbury’s (4%), and Tesco (3%).

When the DMA asked the same question back in 2018 the winners looked very similar. Consumers mentioned Amazon the most (14%), with similar levels of popularity for Marks & Spencer (4%), John Lewis (4%) and Sainsbury’s (4%).

The ‘Customer Engagement: How to Win Trust and Loyalty’ report also reveals that consumers’ loyalty to Amazon is almost as likely to be driven by convenience (54%) as it is a genuine connection (46%). Evidently, many consumers tend to view Amazon as more of a dependable service as opposed to an actual brand to form a relationship with.

The survey also revealed that over a third of consumers (35%) continue to report not feeling loyal enough to any brand to name it as their favourite, an increase from 33% in 2018.

“Somewhat surprisingly, despite consumers’ heavy reliance on Amazon’s services during 2020’s nationwide lockdowns, it has not gained significant traction with customers over the last two years. Coronavirus has led to an increasing number of consumers relying on brands like Amazon for key services, but this appears to be driven by necessity and not entirely preference,” said Tim Bond, Head of Insight, DMA. “There are also an increasing number of consumers who report not feeling loyal enough to name any brand as their favourite, which suggests that there is still a huge window of opportunity for less established brands to secure a loyal customer base.” 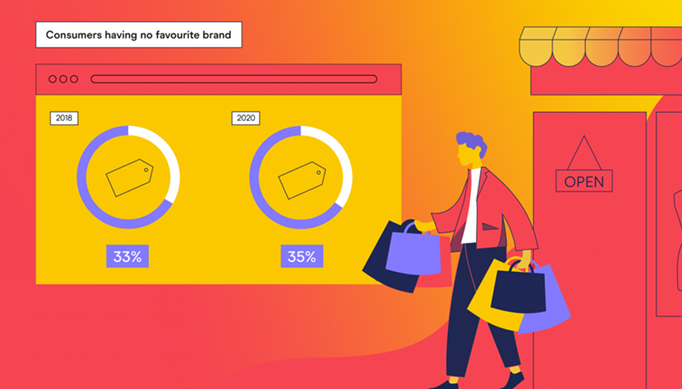