Facebook has suspended Aggregate IQ (AIQ), a Canadian data firm that played a key role in the campaign for the UK to leave the EU, saying it may have improperly received users’ data.

The social network cites reported links with the parent company of Cambridge Analytica (CA), the consultancy accused of improperly accessing the data of millions.

Christopher Wylie, a whistleblower who once worked at the UK firm, has said that it worked with the Canadian company.

In a statement, Facebook said: “In light of recent reports that AggregateIQ may be affiliated with SCL and may, as a result, have improperly received FB user data, we have added them to the list of entities we have suspended from our platform while we investigate. Our internal review continues, and we will cooperate fully with any investigations by regulatory authorities.”

Strategic Communication Laboratories (SCL) is a government and military contractor that is the parent of Cambridge Analytica.

Wylie has said that AggregateIQ received payment from a pro-Brexit campaign group before the 2016 referendum when Britain voted to quit the European Union.

The Canadian federal agency charged with protecting privacy rights of individuals said on Thursday that the agency, along with its counterpart in British Columbia, would jointly investigate Facebook and AggregateIQ over the ongoing data scandal.

British Columbia’s privacy commissioner was separately investigating AggregateIQ over whether the Victoria-based company had broken provincial personal privacy rules for its role in the Brexit campaign.

Cambridge Analytica tweeted on Wednesday: “When Facebook contacted us to let us know the data had been improperly obtained, we immediately deleted the raw data from our file server, and began the process of searching for and removing any of its derivatives in our system.”

An ex-volunteer with the campaign has also claimed Vote Leave donated £625,000 to another group to get around campaign spending limits, with most of the money going to AIQ. Vote Leave has denied any wrongdoing.

AIQ’s website once quoted Vote Leave chief Dominic Cummings saying: “Without a doubt, the Vote Leave campaign owes a great deal of its success to the work of AggregateIQ. We couldn’t have done it without them.” The quote has since been removed.

In total, AIQ was given £3.5m by groups campaigning for Brexit, including Vote Leave, the Democratic Unionist Party and Veterans for Britain. The UK’s Electoral Commission reopened an investigation into Vote Leave’s campaign spending in November.

Facebook to warn users who had their accounts breached

Facebook members will find out today from 17:00 BST whether they are among the 87 million potential users whose data was shared with Cambridge Analytica.

Every account holder will receive one of two notices informing them whether their data was breached.

The tech giant said people will also be shown what apps they use and what data those apps may have gathered.

Facebook has additionally suspended a data analytics firm called Cubeyou, ahead of an investigation.

The tech giant will look into into whether Cubeyou collected data for academic purposes and then used it commercially, following a partnership with Cambridge University in the UK.

The investigation follows allegations reported by CNBC, regarding a personality quiz called “You Are What You Like”, also known as “Apply Magic Sauce”. 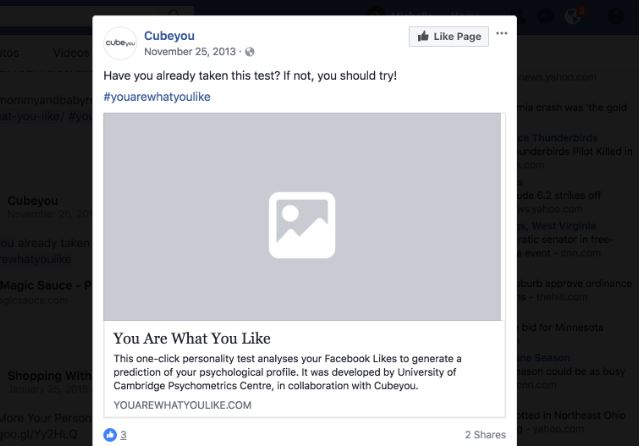 Cubeyou denies the allegations. Both the firm and Cambridge University state that the app made it clear that data was for use in both academic and business purposes.

CubeYou collected a lot of this data through online apps that are meant to be entertaining or fun.

According to its website, one of CubeYou’s “most viral apps” is a Facebook quiz created in conjunction with the University of Cambridge called “You Are What You Like.” It is meant “to predict a user’s personality based on the pages s/he liked on Facebook.”