After the 2017 harassment scandals rocked Hollywood, this year’s Golden Globes were under close scrutiny to see how the industry would respond. New data from 4C Insights looks at social media engagement, and why hashtags #TimesUp and #WhyWeWearBlack became so popular.

4C Insights taps into 1.7+ billion consumers and 41 languages to harness the limitless focus group of social media. The company used the metric ‘Engagements’, which encompasses mentions, retweets, comments, and post likes on official Facebook pages and Twitter handles during the 2018 Golden Globe Awards.

The analysis gives further insigh into audience sentiment of the show, and what was top of mind for those watching at home.

Some key findings from the awards night reveals:

• Saorsie Ronan saying “Hi!” to her mom on Facetime was the most engaged with moment of the night with more than 91K engagements. Following that moment was when Elisabeth Moss won for ‘Handmaid’s Tale’ (52,824 engagements) and when ‘Three Billboards’ won best screenplay (44,458 engagements.)

• ‘This is Us’ was most engaged with show, seeing a whopping 320K engagements throughout the show. Those who engaged with the show also engaged with Chevrolet, John Stamos and HomeGoods.

• ‘The Shape of Water’ was the most engaged with film, seeing 19,412 engagements throughout the show. Those who engaged with the film also engaged with Sprite, Barbara Streisand and Toys R Us. 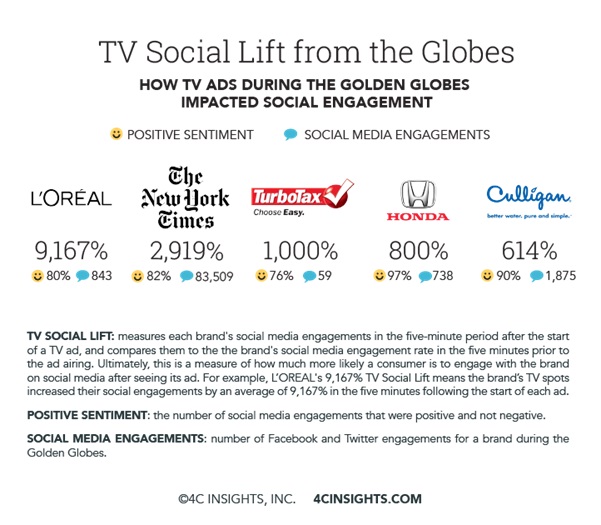