Only half of UK online ad campaigns targeted at women actually reached them, with the FMCG sector struggling most to reach targets, according to new research.

The study of 60,000 campaigns across 20+ countries by measurement company Nielsen, also found that mobile tends to be better than desktop at hitting target audiences.

Only 50% of ad impressions served in the UK that were meant for women were served to women, compared to the 62% success hit rate when targeting men. This discrepancy was even more pronounced when targeting 18-34 year olds, with just 22% successfully hitting women but 33% for men.

Overall, just 54% of ad impressions were delivered to the audience they were meant for.

Accuracy also varies widely by sector. Travel and Business/Consumer Services marketers were the most likely to reach their desired audience (both doing so 67% of the time) followed by Entertainment (65%). In contrast, Retail (42%) and FMCG (43%) marketers struggled most to reach their target audience. However, FMCG had a much higher hit rate on mobile (52%) than desktop (42%), as did Computers/Electronics (60% vs 51%). 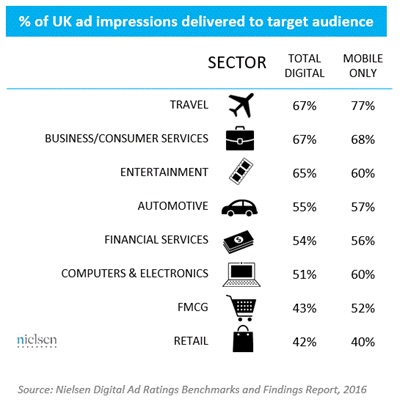 The rise of mobile

The data, collected by the company’s Digital Ad Ratings service, revealed that the proportion of campaigns involving a mobile element more than doubled from 22% to 55%. It also showed that for campaigns aiming to reach both men and women, mobile outperformed desktop, having a higher on-target hit rate for six of the nine age breakdowns.

Mobile provided one area where advertisers are much better at targeting women than men. Among mobile campaigns targeted at 25-44 year olds, 37% of impressions were successfully served to women, compared to just 22% among men – nearly double the on-target rate.

Farmer reveals that the number of campaigns measured through the service jumped 78% year-on-year. He says that as the digital media ecosystem becomes more complex, this large rise is “indicative” of more marketers viewing third-party measurement as “vital in ensuring they’re actually reaching their audience and maximising ROI.”

He echoes the ongoing calls from the buying community about third-party measurement in that “buyers should have more visibility about campaign performance from independent third parties.”