Ahead of today’s expected Snapchat IPO, Verto Analytics loos at how US usage of the popular messaging app compares to the UK data. 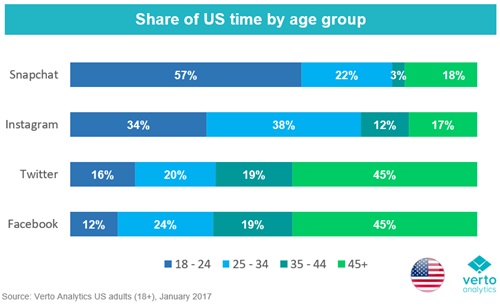 • As in the U.K., Snapchat is the most orientated towards 18-24s in the U.S. but the skew towards younger for the makeup of the audience isn’t nearly as great as the skew to younger by time spent 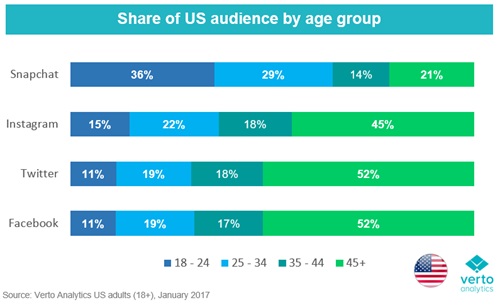 Snapchat is highly “sticky” and engagement is rising

• As in the U.K., the average U.S. Snapchat user spends much more time on the platform than does the average Instagram and Twitter user but far less than Facebook 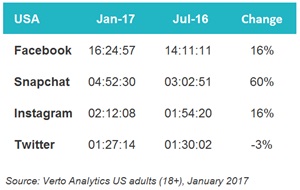 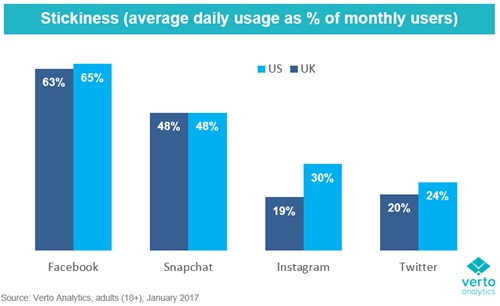 I’ve also added an extra quote from Dr. Hannu Verkasalo, CEO: “Snapchat is one of the most successful digital properties around – and certainly the most discussed these days with the impending IPO. Despite many trials, Facebook or Google have not been able to find an app to slow Snapchat down. Facebook’s Instagram, in fact, was forced to activate itself on the copycat track – which in itself is a big sign of recognition for Snapchat. There are questions about the sustainability of their app – does it continue to be the winner for younger people in the future? There are also questions around its revenue models and further growth trajectories as a public company and will face an intense, scrutinizing eye from the public and external investors who aren’t always ready for a bumpy ride like the venture capitalists.” 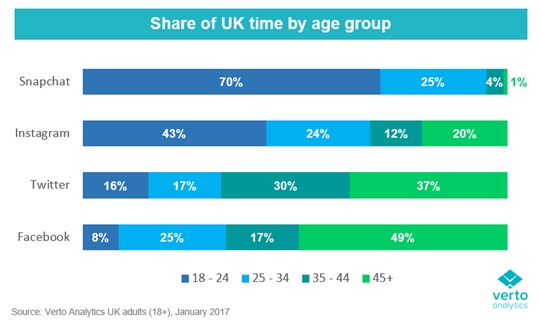 • Nearly 40% of Snapchat’s audience is over 35 but they account for just 5% of the time.
Snapchat is highly “sticky” but engagement is falling

• The average Snapchat user spends 4 hours 22 mins on it a month: down from 5 ½ hours six months ago. However, this is still much higher than Twitter (56 mins) and Instagram (41 mins) but much lower than Facebook (12 hrs 43 mins)

• Snapchat has high “stickiness” – on any given day about 48% of people who’ll use it during the month will be active, compared to just 19% for Instagram and 20% for Twitter. Facebook has 63% “stickiness”

• “There are questions about the sustainability of Snapchat’s app, particularly whether it will continue to be championed by younger people in the future on whom it is so reliant, as the huge share of time figures for the UK illustrate,” says Dr. Hannnu Verkasalo, Verto Analytics’ CEO. “Facebook and Google have grown into multi-brand publishers, betting on many avenues, and their fortunes are built on top of a strong, long-term audience whilst Snapchat’s active user base has been so for just 1-2 years.”