Around 615 million devices are now blocking ads across the globe, as more people deploy ad blocking software on their phones too, according to new research.

The figure, from a new report from Pagefair, represents year-over-year global growth of 30%.

Despite ever smaller numbers of people using desktop and laptop computers, adblock usage on these platforms grew by 34 million to reach 236 million active devices.

“The state of the blocked web” introduces new empirical global, regional, and national data on adblock usage and is the first unified data available for both mobile and desktop adblock usage. It reveals that the “blocked web”—the part of the web where users block ads—has grown to 11% of the global online population.

“The continued growth of the blocked web is a serious challenge to the digital media industry, but it is also a singular opportunity to start over, avoid the mistakes of the past, and serve ads that don’t annoy users,” said PageFair CEO Sean Blanchfield.

The report also introduces insights about the demographics and motivations of adblock users, drawn from a survey of over 1,000 adblock users in the United States.

Adblock usage has spread from its “early adopter” base of young males to a broader demographic that includes men and women of all ages. Concern over viruses and malware was the top reason cited for using adblock software.

Blanchfield commented, “Serving tamper-proof and non-interruptive ads is preferable to turning users away from websites. We are heartened to see hundreds of websites follow Facebook’s lead by first listening to users and fixing problems before serving ads.”

Mobile on the rise

The rise of international ad blocking has coincided with a rise in mobile ad blocking. Sixty percent of ad blocking (308 million devices) occurs on mobile now. It is projected that mobile ad blocking will continue to make up a larger chunk of the overall ad block pie. According to Akhtar, mobile ads are more likely to prompt poor user experiences, which gives users more incentive to block them. 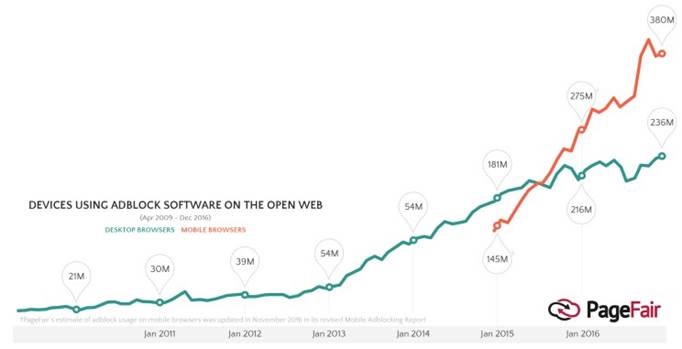 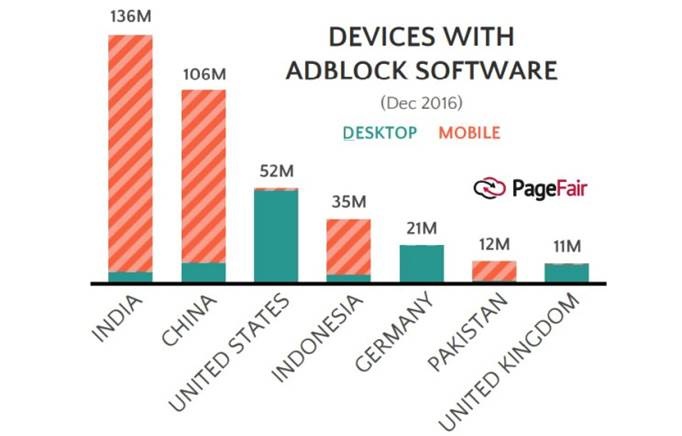 Ad blocking is largely a desktop phenomenon in the U.S., where desktops were the primary way Americans accessed the internet when ad blocking started. Other countries such as China bypassed desktops and went straight to mobile once the internet became accessible there.

The U.S. is an outlier in its prevalence of desktop ad blocking. Among countries that have more than 30 million devices blocking ads, the U.S. is the only one that has more desktop than mobile ad blocking.