The UK digital ad spend grew 16.4% in 201, with the average home now owning 8.3 internet devices, according to new stats from the IAB.

• An additional near £1bn spent to attract customers via ‘deal’ websites 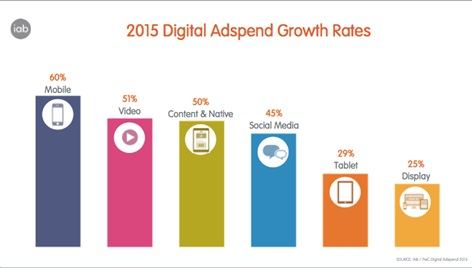 Video ad spend, overall, grew 50.7% to £711 million whilst video spend on mobile alone increased by 98% to £353 million due to the increasing numbers of people watching video, TV and film on smartphones.

Content and native advertising spend – which includes ‘advertorials’ and ads in social media news feeds – increased by 49.9% to £776 million.

“The increasing array of devices people use to go online has helped digital ad spend hit another gear as advertisers look to reach them and time spent online increases,” says Tim Elkington, Chief Strategy Officer at the UK’s Internet Advertising Bureau. “Smartphones are the major driving force behind this, as people increasingly use them for activities they used to do on desktop, from searching and shopping to social and watching video.”

Direct sales – where ads are bought at fixed prices directly from media owners using manual processes – now represent just 37% of display ads (down from 47%) while ad networks make up the remaining 4%.

“We’re seeing a three-pronged change in media owner strategy when it comes to selling display ads,” says Dan Bunyan, Senior Manager at PwC. “There’s a shift in sales from networks to Real-Time-Bidding exchanges, a shift from direct to programmatic direct, and one from open to private market places. It’s almost gone full circle in terms of the desire for a more controlled environment to sell in. We predict programmatic will account for 80-90% of display ad sales by 2019.”

Consumer goods, such as food, toiletries and clothing, companies spent the most on banner and video display ads in 2015, responsible for 18% of spend, followed by travel & transport (13.4%) and retailers (13.3%).

In addition to the £8.61bn going on ad spend in 2015, advertisers spent a further £953 million to attract customers via activities on ‘deal’ websites such as price comparison, voucher, cashback, loyalty and product review sites.

Known as ‘online performance marketing’, 75% of adults online have undertaken at least one of the OPM activities listed in the last six months, with usage of price comparison sites (40%) the most popular activity, followed by entering a competition (35%) or using a voucher code site (26%).