April Fool’s Day has become a major event in the digital calendar, with many brands and media owners creating elaborate pranks to show off their funny side (and get plenty of social media shares and column inches in the process). We’ve put together some of the best hoaxes from 2016’s pranksters for your viewing pleasure…

Mic Drop automatically inserted an explanatory image, just to make sure everyone understands.

As Google put it: “Simply reply to any email using the new ‘Send + Mic Drop’ button. Everyone will get your message, but that’s the last you’ll ever hear about it. Yes, even if folks try to respond, you won’t see it.”

After facing a backlash from users, some of whom accidentally insulted friends, lost jobs and angered colleagues, Google has disabled the feature, just hours after it was launched.

.@gmail just added some "mic drop" feature that sends a Minions GIF. I accidentally sent it in an official email… pic.twitter.com/nVXQW0xsTk

In a statement, the company said: “Well, it looks like we pranked ourselves this year.”

“Due to a bug, the Mic Drop feature inadvertently caused more headaches than laughs. We’re truly sorry. The feature has been turned off. If you are still seeing it, please reload your Gmail page.”

Alongside the statement, Google stressed the feature was not made available to Gmail business customers, and explained users were notified about the button when opening emails.

Sony ain’t afraid of no ghost- 30 years on the from The Ghostbusters the Japanese electronics giant has created a Proton Pack to capture content from parallel dimensions. Incorporating technology from other Sony products, such as its phones and cameras, the Proton Pack is both water and slime proof. A new ad that appeared on Sony’s YouTube page Thursday goes through some of the technical and ergonomic innovations of this newest advancement in inter-dimensional pest control. Just remember: don’t cross the streams.

We're attempting to get our colleagues to eat biscuits filled with toothpaste. We'll probably get fired soon https://t.co/0x3BtcFv2p

Innocent decided to swap out the creamy fillings of several of your favourite sandwich-style biscuits for toothpaste and leave them in their office kitchen for their staff to eat. They then set up a hidden camera and livestreamed the feed via Periscope so everyone could watch unsuspecting Innocent employees get an unexpected mouthful of fluoride.

Lyft lets you prank your friends

Lyft users in San Francisco, Los Angeles, and New York can plan ahead and request a Lyft to arrange a prank beforehand with the driver so they can do something weird to your friend during the ride Just request a prank mode for your friends. But will users be able to tell the difference from a regular taxi ride?

Who better to share YouTube’s amazing new 360 videos with than Snoop Dogg? SnoopaVision combines 360 immersive viewing with a pioneer is West Coast g-funk hiphop takes the experience to the next level. And Snoop was involved in every facet of the development process. Simply press the SnoopaVision icon on the lower right corner of your YouTube video, sit back, and enjoy.

Forget cars – Google is introducing the self-driving bicycle in Amsterdam, the world’s premier cycling city. The Dutch cycle more than any other nation in the world, almost 900 kilometres per year per person, amounting to over 15 billion kilometres annually. The self-driving bicycle enables safe navigation through the city for Amsterdam residents, and furthers Google’s ambition to improve urban mobility with technology. Google Netherlands takes enormous pride in the fact that a Dutch team worked on this innovation that will have great impact in their home country. 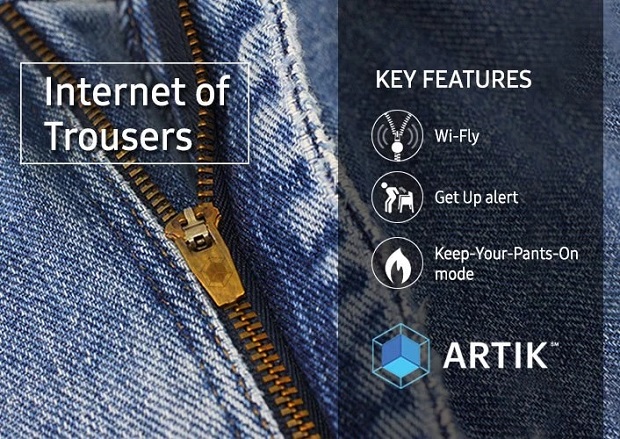 Forget the Internet of Things — Samsung this year launched the Internet of Trousers. It incorporates technology and clothing. The ultimate wearables are powered by ARTIK Smarter Fashion chip module and controlled by the Smarter Fabric Care companion app.
Features include push notifications when your fly is down (Wi-Fly) and an aggressive stand up alert that shock you for being inactive. One of the highlights of proper IoT devices is the ability to connect with other gadgets. The smart trousers do the same and will notify your Samsung fridge to remain locked if you’ve been overeating.

Google Cardboard has been hugely successful, but its missing a sensory element to make the experience complete. Enter Google Cardboard Plastic. This revolutionary new product lets you see, hear, touch and smell the world just like you do in real life. It comes with 4D integrated perspective, 360° spatially accurate sound, 20/20 resolution and advanced haptics for realistic touch sensations. With Google Cardboard Plastic, we can replace virtual reality with actual reality.

HubSpot is known for having great employee perks, one of the most popular being the option to bring your dog into the office. Now HubSpot is taking it to the next level, with the Productive Employee Things (PET) Program which allows people to not only bring their dogs to work, but any animal they might have at home. The PET Program is the direct result of an undoubtedly very scientific research done on HubSpots dog policy that showed a 278% increase in employee satisfaction whenever someone was within 10 feet of a dog. Further research revealed this was true of all animals.

This prank was actually rather useful. Google’s emoji Smart Reply in Inbox updates an existing feature to suggest possible ways to reply to a message. On April 1, the feature will only suggest emoji responses. While not appropriate for emails, this kind of Smart Reply would be quite useful in a messaging app like Hangouts or Google Messenger. 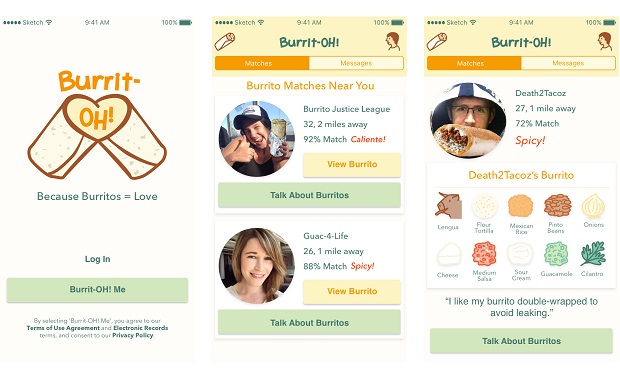 Dating apps are using ever more sophisticated algorithms and more specific information to help users make a match. Zoosk took this to the next level with Burrit-OH!, the dating app that makes matches based on your burrito preferences. 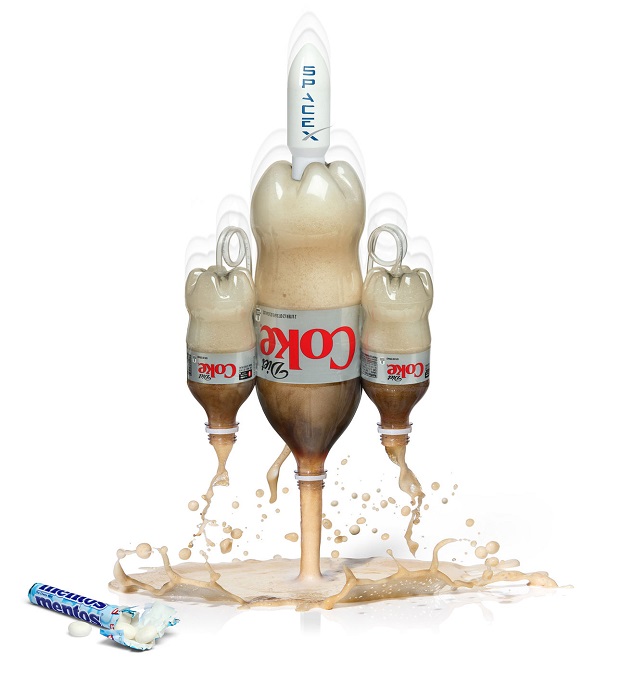 Mimicking Elon Musk’s real space endeavours, this project goes where now YouTube video has gone before to safely land a coke and Mentos Coke rocket. SpaceX has has teamed up with ThinkGeek so you can make your own at home. By using just a Diet Coke bottle and some Mentos, your family can make a bottle rocket that will shoot 30 feet into the air before returning right to your backyard. Set up takes only 5 minutes; the results are out of the world.

The US Army has chipped in with the announcement of technology allowing them to teleport soldiers anywhere in the world.

In honour of Funky Town Pegman, Google Map’s official Twitter account even changed its name to Groovy Maps and has since been posting some funky tweets. If you open up the Google Maps browser, you are sure to notice that the Pegman Street View has undergone a 1970’s makeover, full with a purple suit and even a snazzy beard. Pegman will perform some moves for you, provided you know where to look. Open the Google Maps app on your smartphone and go to the top and select “Visit Funky Town in the Google Maps App”. You will need to select your phone type from a menu and remain logged in to your Google Account. Once the process is completed, head to “Explore Nearby” and tap on “Funky Town” and behold, Pegman gets groovy right on your smartphone. 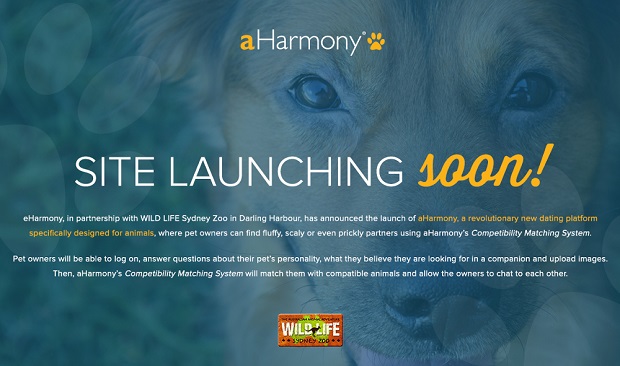 There are dating sites for every conceivable sexual orientation. Now other species are getting in on the action too. eHarmony has partnered with Wild Life Sydney Zoo to launch a dating platform exclusively for animals.

Every company in the delivery business is investigating using drones. However, the technology is far from ready, so Google has come up with an intermediary solution. With parachutes, Google can deliver packages, as well as joy to users. The company’s controlled hover utilization team of engineers researchers and scientists (C.H.U.T.E.R.) spent years developing the various aspects of a parachute to provide a seamless experience. I advise you to watch this video till the very end.