Over 1.4 billion global consumers will utilise a mobile messaging application this year, and that number will rise to 2 billion by 2018, according to new research. 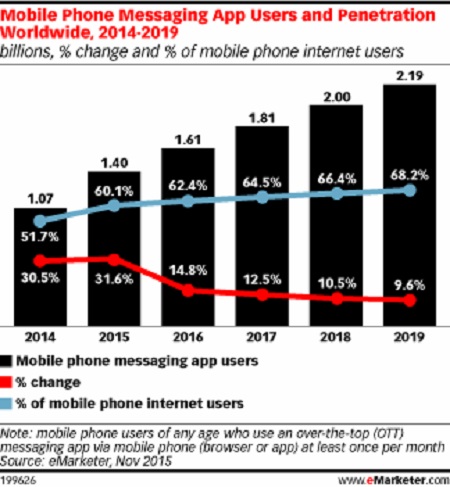 The study, from eMarketer, predicts that three-quarters of smartphone users will make use of an over-the-top messaging app once a month or more by the end of this year.

Mobile phone messaging apps are defined as services that provide private one-to-one or one-to-many communications between registered users transmitted via data connections and the mobile web.

Considered by region, OTT messaging apps get a heavy workout in Asia-Pacific, where 58 percent of the world’s messaging app population lives. 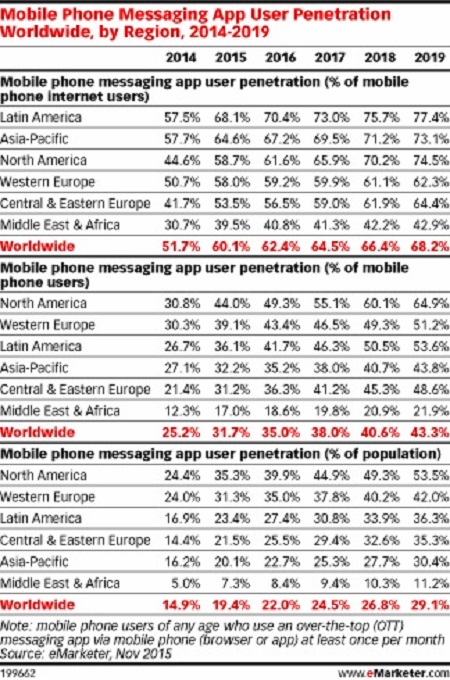 Latin America that has the highest usage with 68.1 percent of mobile internet users using a mobile messaging app once a month. Latin America’s percentage could grow to 77.4 percent by the end of 2019, according to eMarketer’s data.

The popularity of messaging apps is expected to grow. eMarketer predicts that by 2018, “the number of chat app users worldwide will reach 2 billion and represent 80 percent of smartphone users.”

An upcoming eMarketer report, featuring a ranking of the top players in this category, will examine the most popular apps including WhatsApp, Facebook Messenger, WeChat, Line, and Snapchat.

The apps vary widely in their approach to monetization, with some still focused on growing their audiences.

“Of those that have moved into monetization mode, WeChat is seen as leading the pack with the most diverse and advanced methods for making money,” noted eMarketer. “The most popular revenue models that have emerged include paid digital content (such as games, videos and emojis), advertising (official accounts, in-feed ads), mcommerce (in-app purchases), online-to-offline commerce (ordering food, hailing a cab) and finance (peer-to-peer payments and subscriptions).