The average online Brit spends 2 hours and 51 minutes a day on the internet, with 45% on computers, 40% on mobiles and 15% tablets, according to new research.

The study, from the Internet Advertising Bureau UK (IAB) and UK Online Measurement Company (UKOM) aimed to provide definitive figure on how long people actively spend online each day, to bring clarity to the market by removing any confusion around the conflicting sources claiming to measure time online.

• This is 1 in every 6 waking minutes

• Social media accounts for over double the share of mobile/tablet internet time than it does of desktop. Entertainment is the reverse 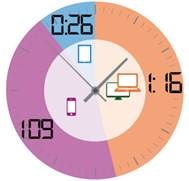 “There’s a lot of confusion when it comes to the various sources claiming to measure how long people spend on different media,” said the IAB’s Chief Strategy Officer, Tim Elkington. “So, we wanted to put a stake in the ground for internet time to remove this misconception and help advertisers understand how much time they realistically have to play with to reach people online. It equates to about 1 in every 6 waking minutes¹.”

The data comes from a combination of meters measuring the behaviour of 73,000 people (a panel) plus thousands of sites and apps being tagged (site analytics).

The resulting figures purely measure “active attention”, that is, only the time people are actively using the internet to do something. Elkington explains: “If I’m surfing the internet on my PC but then start using a word document, the internet time is stopped even though the web page is still open. A similar approach is applied on mobile when internet activity is interrupted due to calls or texting.”

The UKOM/comScore data reveals that 16.7% of all UK internet time (1 in every 6 minutes) across computers, tablets and smartphones is spent on social media – up from 12% two years ago. Social media has overtaken entertainment, whose share nearly halved from 22.1% to 12.4%.

Games follows next at 6% share – double that of two years ago (3%). Together, these activities account for over one third of Britons’ time online. 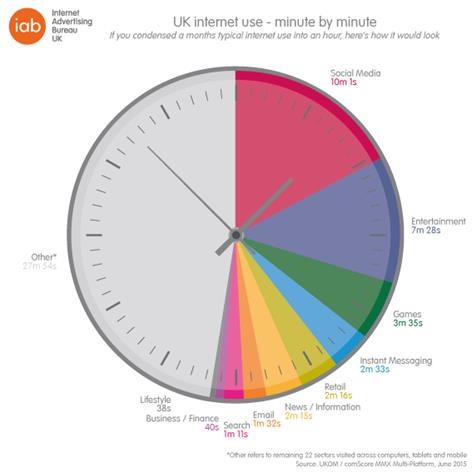 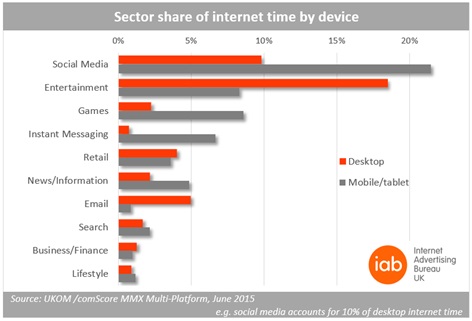 “When trying to reach consumers, advertisers can’t afford to think of time online as a homogenous entity,” said UKOM’s General Manager Scott Fleming. “Mobile internet time is more heavily skewed towards social networking and games whilst desktop is more loaded towards email and entertainment such as film and multimedia. “The most effective digital ad strategies recognise and take into account how behaviour and mind-set differ dramatically by device.”