The first-ever eBay ‘rich list’ has been published – and reveals that Britain’s top sellers are raking in up to £17m a year trading on the site.

The ‘Power 30 UK Index’ ranks the site’s biggest 30 independent sellers and reveals they have an average annual turnover of nearly £4m.

Perhaps unsurprisingly, the most common type of seller in the index is electrical goods – accounting for seven.

The huge figures reveal how eBay has inspired a new generation of entrepreneurs who have built money-spinning businesses out of the online marketplace.

The Power 30 UK Index was compiled by www.NetVoucherCodes.co.uk using data from the eBay analysis tool Terapeak.

Top of the list is Chinedu ‘Ken’ Emechebe, 37, who sells mobile phone accessories under the name ‘universalgadgets01’.

He has turned his bedroom trading hobby into a business with sales of over #15million-a-year and employs around 45 people to help with eBay sales.

The father-of-two said: “I think the great thing about eBay is just from day one the ease of selling on eBay makes it great for small businesses.

“On eBay everything is set up for you. Yes you pay your fees, but you would have to pay for advertising costs if you went on Google.

“eBay sets you up, it has millions of people who come on to the website every day, and all these people who are on there are looking for products and deals.”

There are more than 200,000 UK business selling on ebay.co.uk, plus millions of private sellers, generating an estimated #6billion of sales in the UK every year.

The company sells gadgets like mobile phone accessories and cables, and was the first UK company to get 1 million feedback seller in 2012.

Mr Emechebe starting his company in the spare room of his two-bed London flat.

Since then he has been forced to relocate three more times due to his growing company, and now works out of a 1,200sq ft warehouse.

He sells around 2,500 items a day on eBay, with most coming direct from factories around the world.

Among his most popular items are the iPhone 5, ethernet cables and headphones.

He said: “We outgrew the house and moved into our first warehouse about a year and a half after starting the business and at the moment we are in our fourth warehouse. We have just grown since then. [I think we are number one because] we have been doing this for a while and we understand the market. We understand what most people on eBay want. Customer service is number one and we have to keep the customer happy. People buy from us because of the range of products we have.

“We try to make sure we are always there, are easily reachable and people can call us to ask us any questions. We are very competitive and everything we sell we get from source. Customers want to buy from a seller that they know they are going to get the item and without hassle.”

Third is entertainment seller estocks, which sells almost a million pounds worth of gadgets a month.

The figures were compiled from Terapeak data using a one-month snapshop of sales on ebay.co.uk between May 5 and June 5 this year.

John Stirzaker, creative director of money saving site www.NetVoucherCodes.co.uk, said: “With more and more people now treating eBay as a commercial search engine, bypassing Google, we thought we would explore how lucrative selling on eBay can be.

“What we found was inspiring. In the face of economic uncertainty it’s great to see true entrepreneurialism is alive and well in the UK.

“With the right research and commitment anybody can start small and build up a successful ecommerce business on eBay.” 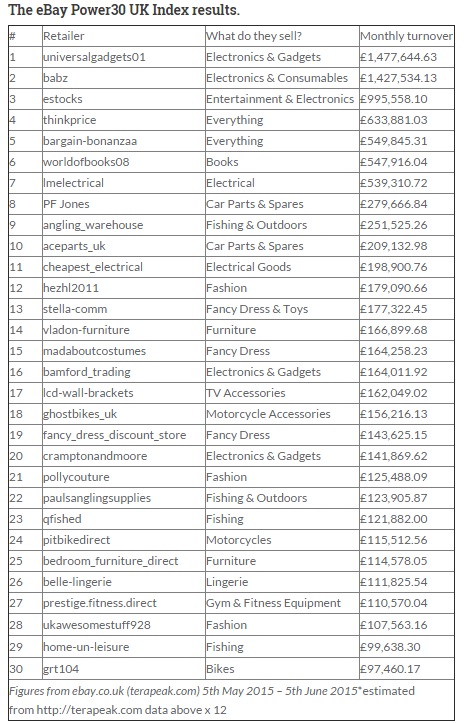