UK retailers are collectively missing out on an astounding £6.6bn per year due to a lack of investment in their mobile offering, according to a new report into mobile spending.

The study, from VoucherCodes.co.uk and the Centre for Retail Research (CRR) indicates that despite retailers reporting their mobile share of online sales almost doubled from 2013 to 2014, from 15% to 28%, the study reveals a multi-billion pound opportunity is still being missed, both online and in-store.

• Despite retailers reporting their share of mobile sales almost doubled from 2013 to 2014, one fifth (17%) still have no mobile offering

• The most mobile friendly retailers are supermarkets (80%), department stores (75%) and pharmacy / chemists (75%)

• Only 16% of retail applications were used ‘a lot’ by consumers, and one quarter (27%) had been downloaded and never used

The VoucherCodes.co.uk and CRR report reveals 15% of consumers now use their mobile as a primary shopping device. What’s more, consumers with a propensity to shop on mobile are also more prolific online spenders overall, making 47% more transactions (14 compared to 9.5) and spending 55% more (£669 compared to £430) than purely online shoppers.

Claire Davenport, Managing Director, VoucherCodes.co.uk: “The growth of online and mobile spending has already had a hugely positive impact on the retail sector. However, there is still a great opportunity being missed – and it is worth billions for retailers. Customers have expressed their intention to spend more on mobile devices, so now is the time to revisit mobile strategy to capitalise on this.”

Not only important in driving online sales, the study also revealed that the provision of mobile features would help drive consumers back into high street stores. Almost half of shoppers (44%) said they would be more likely to visit mobile-oriented stores in 2015, and more than a third (36%) also said they would spend more.

Click and collect drives the most shoppers back into store, with 26% saying they would spend an additional 15 minutes in a store that offers click and collect, and spend an extra £18 per trip. Augmented reality was the second most important factor, with a quarter (24%) of shoppers saying that this would make them more likely to shop in a particular store, spending an extra 17.5 minutes and an additional £15.90 per visit.

A more personalised experience using intel taken from online shopping habits would encourage consumers to spend an extra £9.40 per trip, and pop-up notifications alerting consumers to most relevant products or discounts would make them spend an additional £9.80 per visit.

Claire Davenport continues: “In light of the continuing fall in foot traffic across high street stores, it’s encouraging to see that there are mobile features that can help attract consumers back into shops to spend. A combination of more established features, like click and collect, and forward-thinking technologies like augmented reality are spiking consumer interest. Customers have indicated they want a personalised experience, so retailers should use data from online purchasing to drive strategy in-store.”

The VoucherCodes.co.uk and CRR study also showed that while almost a quarter (23%) of consumers love mRetailing, 40% still feel this could be improved, while a third don’t currently like using their mobile to shop. Slow loading pages (64%), websites that freeze (49%) and too many products to sift through (46%) are the top three barriers for shoppers using mobile. Security (43%) and poor payment options (35%) were also a concern.

While mobile is now heavily integrated into consumer’s discovery and product browsing behaviour, less than one fifth (20%) of shoppers use mobile to make a final purchase. Only 16% of retail apps were used ‘a lot’ by consumers, according to the VoucherCodes.co.uk and Centre for Retail Research study. A quarter (27%) had been downloaded and never used.

Claire Davenport continued: “A key outtake from our research is the importance of simplicity and a seamless experience. Of customers that use mobile as their primary shopping device, almost half (44%) said they did so because it was convenient.

“Problems like slow loading sites and poor payment options are preventing consumers from getting to the point of purchase. An astounding 40% feel mobile retail could be improved – retailers could potentially monetise this group if they improved their offering.

“In light of Google’s recent announcement that it is changing its algorithm to adapt to the growing number of people using mobile for search, it is even more crucial that retailers update their mobile strategy.”

How does the UK retail sector rate its own mobile capabilities?

Retailers undoubtedly recognise the importance of mobile retail, with 66% saying investment in this would help to drive sales growth and 88% believing they will get more visits in-store. Retailers estimated that they would lose one fifth of sales (22%) due to a poor mobile-enabled website, and a quarter (26%) due to a poor mobile application. Despite this, however, 17% of retailers still have no mobile offering.

The most mobile friendly retailers are supermarkets (80%), department stores (75%), pharmacy/chemists (75%) and those selling electrical appliances (75%).

Claire Davenport continues: “It’s promising to see that retailers are recognising the importance of enhancing their mobile strategies, whether online or in-store. However, there is still a disconnect between what consumers are experiencing and what retailers believe they are providing. VoucherCodes.co.uk’s report will help to highlight the areas that should be addressed so we can start to close this gap.”

VoucherCodes.co.uk is operated by RetailMeNot, Inc. (http://www.retailmenot.com/corp/) the world’s largest marketplace for digital offers. The company enables consumers across the globe to find hundreds of thousands of digital offers for their favourite retailers and brands.

Would the provision of certain features would make you more likely to visit, or spend more time and money in a particular store? 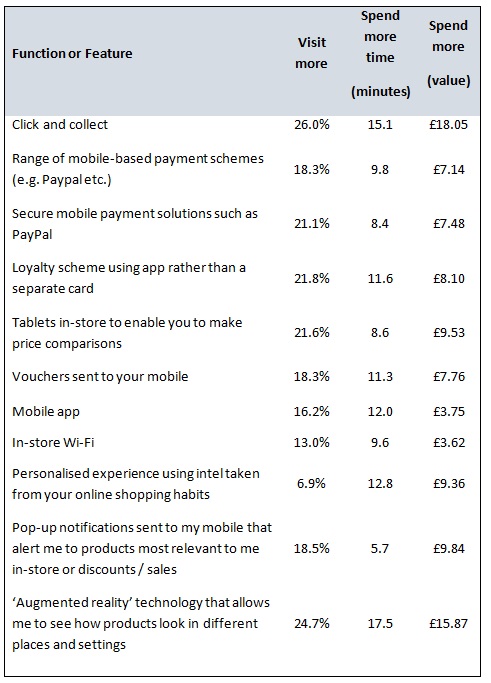