Digital ad spend grew 5.8% increase in 2014, with digital now accounting for most investment, according to new research.

The data, from the Advertising Association and Warc, indicates that UK advertising grew at its highest rate since 2010 last year, increasing 5.8% to £18.6bn.
This strong growth is forecast to continue, with adspend predicted to break the £20bn barrier in 2016.

Broadcast video-on-demand (+15.1%), digital national (+16.4%) and regional (+24.7%) newsbrands were stand-out performers but the upward trend is also reflected in magazines and outdoor.

Tim Lefroy, Chief Executive at the Advertising Association said: “It’s time to stop thinking of digital as something that lives on the internet. In cinemas, outdoor, news, television and elsewhere, advertising is seizing the opportunity of new technology. That trend is transforming our media, driving growth and keeping UK advertising ahead of the global competition.”

Separate data recently released by the AA predicts that 70,000 new advertising-related jobs will be created over the next five years – double the rate of the UK average, bringing the total number of people working across the sector to over 434,000 by 2019.
The Advertising Association/Warc Expenditure Report is the definitive measure of advertising activity in the UK. It is the only source that uses advertising expenditure gathered from across the entire media landscape, rather than relying solely on estimated or modelled data. With total market and individual media data available quarterly from 1982, it is the most reliable picture of the industry and is widely used by advertisers, agencies, media owners and analysts. 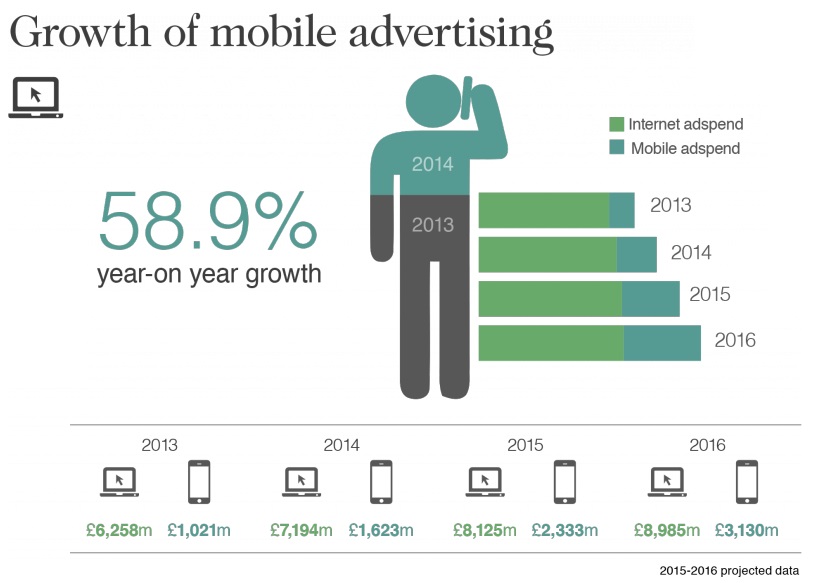 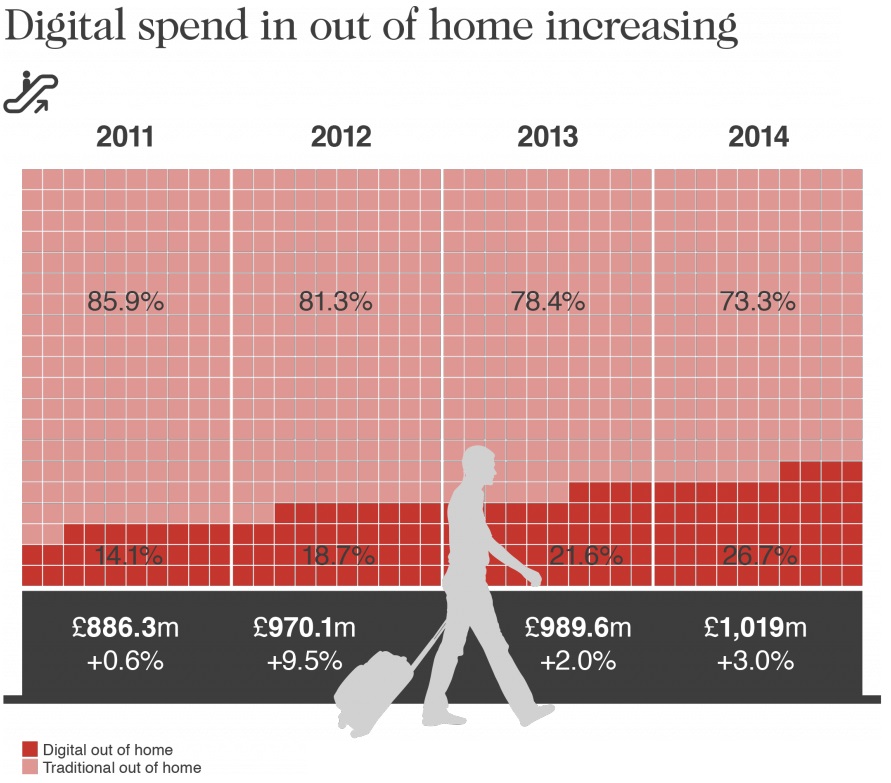 Ian Twinn, Director of Public Affairs at the representative body for advertisers ISBA welcomes the report: “The new figures for ad spend are great news for business and consumers, this is at its highest rate since 2010, highlighting advertising as an economic powerhouse for the exchequer. The strengthening economy is reflected in growing spend on advertising across all media from traditional TV spots, regional news brands to digital and the fast growing mobile advertising which break the £20bn barrier by 2020.”
“When business spends money on advertising it means consumers are buying and job opportunities are growing.”

• TV Spot advertising, benefiting from the football World Cup, increased 5.4% year on year to reach £4,463m in 2014. The growth rate will slow to 4.4% this year, however this is up on our January forecast by 0.3pp. With adspend penned to rise a further 4.6% in 2016, TV spot is set for its strongest consecutive growth in over a decade.

• Internet (including mobile) adspend – using the IAB definition, incorporating revenues from newsbrands, magazine brands, broadcaster VOD and radio stations – rose by an estimated 15.0% in 2014. Mobile was a strong driver of this growth and now accounts for just over 22% of spend on £1,623m (up from a 10% share in 2012). Further, we expect mobile to comprise just over a third of internet adspend by the end of the forecast period. Total internet advertising will rise in the region of 11.5-12.0% until 2016.