P&G’s sanitary brand Whisper aimed to break the taboo in India around menstruation. This case study looks at how the firm came up with a powerful commercial and social media campaign encouraged 2.9 million women pledge to “touch the pickle jar” and defy dated myths- winning a Cannes Lions award for its efforts.

• Sanitary brand tackles Indian menstruation myths with powerful video ad and social campaign
• 2.9 million women pledge to “touch the pickle jar with share of voice growing from 21% to 91%
• Sparked conversation in India that ranged from a TedX Bangalore talk to the endorsement of a leading Bollywood actress

In India, there are many myths surrounding menstruation, including one that ‘a menstruating woman should refrain from touching a pickle jar as the pickle could get spoilt’.

The logic behind this myth being the belief that a woman on her periods is impure and anything she touches becomes dirty, unholy, impure or unpalatable. Menstrual myths like a menstruating woman shouldn’t enter temples or places of worship, shouldn’t enter the kitchen, should stay within her room are still believed and practised in some Indian homes. While education has helped debunk these myths over time, the message still needed to reach and influence a large population that keeps women grounded based on these myths.

Developed by P&G India and BBDO India, the groundbreaking film by the Mumbai office of BBDO India encourages women to defy tradition and taboos by touching the pickle jar.

An active teenage girl courageously touches a pickle jar and proclaims “I touched the pickle jar” as other women applaud. A voice-over urges: “Girls, let’s make the taboos go away and touch the pickle jar.”

Not only did 2.9 million women pledge to “touch the pickle jar,” but the work resulted in sparking a huge conversation in India around the issue.

Whisper’s share of voice grew from 21% to 91% in its category. It created a conversation in India that ranged from a TedX Bangalore talk to the endorsement of a leading Bollywood actress.

The campaign won the Glass Lion Grand Prix at Cannes International Festival of Creativity, which recognises work that implicitly or explicitly addresses issues of gender inequality or prejudice, through the conscious representation of gender in advertising.

Cindy Gallop, president of the first Glass Lions jury and founder-CEO of IfWeRanTheWorld/MakeLoveNotPorn, said “We were laser focused on work that challenges and shatters gender stereotypes and has the power to effect true cultural change. What made the [Grand Prix] decision unanimous was that we have in ‘Touch the Pickle’ a campaign that takes on the challenges of a huge gender issue … in a very open and disruptive way … and is humorous and engaging.”

Gallop noted that the “Touch the Pickle” work “does it for a brand, rooted in its brand values, and taking on a responsibility we’d like more brands to take on.”

Susan Credle, a Glass judge who was named global chief creative officer of FCB earlier this month, talked about how the campaign helps women overcome the sense of shame surrounding periods in India: “I’ve always said that if men got periods, there’d be a parade and bragging about who has the thickest stream.” 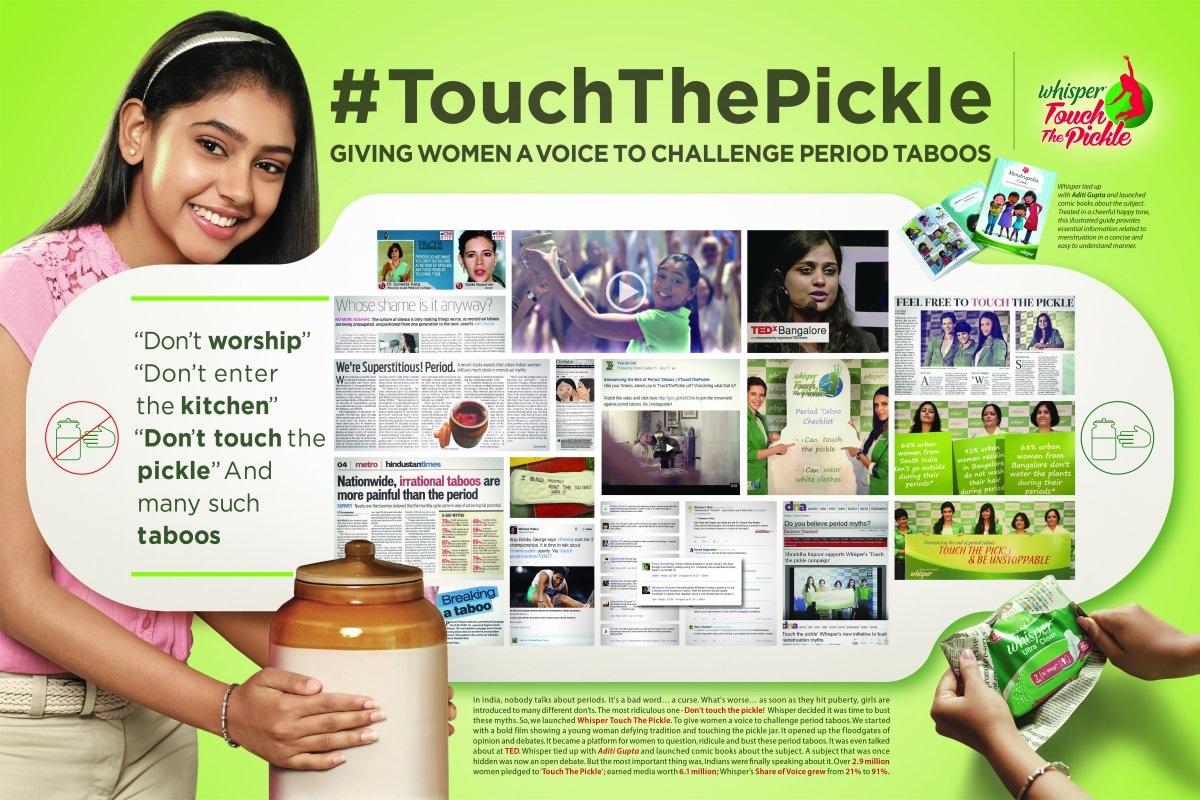