Set to launch later this year, the move comes as Twitter is branching out from advertising to find more ways to make money — both for itself and for its most prolific users.

This appears to be the end result of the much talked about subscription-based product Twitter has been working on.

The social network is also planning a feature that lets people create and join groups based around specific interests.

It also said it was testing a live audio discussion service – which has proved popular on a new rival, the audio-only social network Clubhouse.

The new features were announced at an investor presentation, where Twitter was addressing its next moves to monetise the platform.

Twitter users – and the company’s investors – have long been asking it to launch a subscription-based model. This as a growing number of internet creators and influencers use tools like Patreon, Substack and OnlyFans to make money from their online popularity.

“Why don’t we start with why folks don’t believe in us,” said chief executive Jack Dorsey at the start of Twitter’s virtual presentation. “It comes down to three critiques: we’re slow, we’re not innovative, and we’re not trusted.”

For a monthly fee users can Super Follow their favourite content creators to receive perks such as: 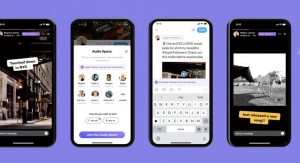 This is both the first paid feature Twitter has offered to users, and a first in terms of Twitter users getting paid directly by their followers.
Popular content creators on Twitter can soon earn revenue from content they contribute to the platform. Super Follows can also be a valuable feature for publications, journalists, and reporters.

Twitter showed an example where a user charges $4.99 per month to receive a series of perks. Twitter sees it as a way to let creators and publishers get paid directly by their fans.

Twitter will presumably take a cut — the company has been hinting at subscriptions features that would offer it a new source of revenue — though it doesn’t appear to have said yet what that fee will be.

Growing trend for social subscriptions and interest based groups

Twitter, which was launched in 2006 and recorded its first annual profit in 2018, said it hoped to double its revenue in 2023.

Direct payment tools have become increasingly important for creators in particular in recent years. Patreon has been hugely successful, and other platforms including Facebook, YouTube, and even GitHub have all launched direct creator payment features.

Twitter also announced a new feature called Communities, which appear to be its take on something like Facebook Groups. People can create and join groups around specific interests — like cats or plants, Twitter suggests — allowing them to see more tweets focused on those topics.

Groups have been a huge success for Facebook (and a huge moderation problem, too), and they could be a particularly helpful tool on Twitter, since the service’s open-ended nature can make it difficult for new users to get started on the platform.

There’s no timeline yet for when either of these features will launch. Twitter listed them as “what’s next” for its platform during a presentation for analysts and investors this afternoon.