Facebook users in France and Germany are leaving the platform even faster than expected, according to new research.

For the second forecast in a row, emarketer has downgraded Facebook user growth in both countries, as younger users shift to other platforms. In France this year, Facebook will experience a decline in users for the first time, whereas Germany experienced its first drop in users in 2018.

Last year, Facebook usage in Germany dropped 1.2% and will fall another 0.9% by the end of 2019 to 25.9 million people. Our previous forecast predicted growth of 0.1%, however the number of users who left the platform outpaced those who joined.

Our revised forecasts for Germany show an average decrease of about 9% in Facebook users under 25 this year. The steepest drop-off will be seen among users ages 12 to 17, decreasing by 19.2%. We expect users 34 and younger to continue leaving the platform through 2023. Incremental user growth among those 35 and over will help Facebook mitigate overall losses, though.

Despite the slight decline in users, Facebook remains the leading social network in Germany and will maintain that status for the foreseeable future. As a result, advertisers in Germany will continue to buy ad space on the platform. In 2020, ad spending on Facebook will grow by 11.9%, reaching $2.49 billion (€2.11 billion).

“Over time, Facebook has lost its appeal for many young people, especially teens, but also younger adults,” eMarketer principal analyst Karin von Abrams said. “Usage of Facebook is still increasing among older internet users, but younger users can find it a bit stale and are drawn much more to Instagram and Snapchat these days. These platforms typically offer more up-to-the-minute experiences and a more vibrant atmosphere. Snapchat particularly benefitted from the Q2 2019 release of its updated Android app—as well as new visual filters, including a ‘baby face’ lens. These changes boosted engagement quite dramatically.”

In France, 2019 will be the first time that the total number of Facebook users will decline. The user base will shrink by 1.3% to 27.6 million. This decline is expected to continue. In fact, by 2022, less than 50% of internet users in France will use Facebook.
The story in France is similar to that in Germany: Younger people are opting for other social platforms over Facebook. In 2020, Instagram users under 25 will surpass Facebook users in that age group for the first time. 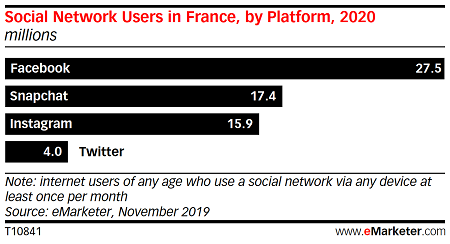