UK marketing managers are already investing in new technologies such as VR, voice, live streaming and artificial intelligence as part of their 2018 strategies, according to a new survey.

The study, from Purch, revealed nearly three quarters (74%) of UK marketing managers are already or will be livestreaming as part of their sales and marketing strategy in 2018.

• 72% are planning on using augmented and/or virtual reality technologies
• 42% have a voice interface on their roadmap
• 38% think virtual reality will proliferate fastest into UK consumers’ buying habits
• 22% don’t know what blockchain is and will not be exploring the technology!

The survey, conducted independently by OnePoll, also revealed that marketing managers in the UK are switching on to the voice interface with 42% of respondents saying it was on their marketing roadmap for next year. Only 18% of those asked had no immediate plans to integrate a voice interface in their strategy with a significant 8% already having designed a voice aspect into their operations. 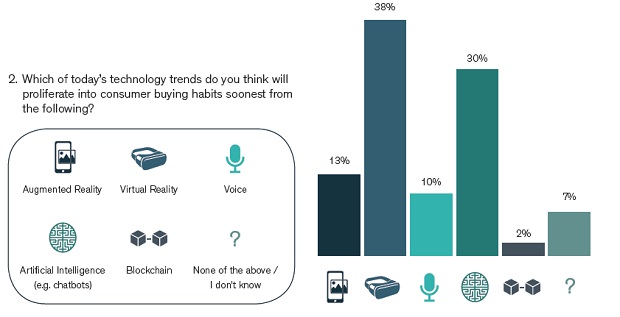 The only future technology that appeared to divide marketers was blockchain. Nearly a fifth of respondents did not know what blockchain was (19%) while 3% said they would never consider implementing strategies relating to the technology and 33% said not for the foreseeable future. Only 3% had any blockchain based technologies in operation and 10% had started planning for it’s advent.

The survey also revealed attitudes of marketers to the ‘see now buy now’ generation of consumers and for technology purchases, 27% of respondents said that when consumers see technology they are interested in, they want to buy immediately and seamlessly from the place where it was seen online. However, 25% of marketers also noted that with technology purchases reviews were significantly important and if a consumer is able to research their product of choice well, they will wait up to a week before buying.

Andrea Baden-Semper, VP of Purch EMEA, said, “As new technologies proliferate ever faster into consumer buying habits, we wanted to gain a sense of how quickly UK marketing managers were taking up their implementation and, crucially, which technologies they were betting on to enter mainstream buying habits fastest. We were very impressed with the level of uptake for virtual and augmented reality, as well as live streaming and voice interfaces. 2018 promises to be a year of significant change in the way marketers are approaching their customers.”

Purch teamed up with OnePoll to quiz 100 marketing managers in the UK about how they’re preparing for the future of consumer retail, and which technologies they think will proliferate into the consumer buying process fastest. Below is the raw data for reference.