Over a third of UK shoppers (36%) have ‘stopped buying a brand or using a company’ because they were uncomfortable with something they did or stood for, according to new research.

The latest industry report from Shoppercentric, a leading independent shopper research agency, has been launched today.

The research, entitled: “WindowON…Trust Issues” was carried out across 1048 UK shoppers aged 18+ and looks at how shoppers feel about the retailers and brands they purchase from.

“Over the last few years, with the rise of social media and 24/7 news, it has become clear that consumers are increasingly aware of shortfalls in the behaviour of the companies they buy from,” said Danielle Pinnington, Managing Director at Shoppercentric. “We wanted to take a closer look at this area, see how deep rooted this is, and explore the degree to which a mindset can drive action.

Indeed, if consumers are as cynical as our research indicates, it highlights the need for brands and retailers to be more aware of how trust issues can develop and what they need to do to avoid this. There’s the potential for serious impact on businesses when trust issues lead to a negative change in behaviour, something retailers can ill-afford to happen.”

• Cynicism – a mindset entrenched in UK shoppers:
o 46 percent of UK shoppers fall into the cynical bracket – failing to agree at all with the statement that they are trustful of others. These shoppers are also less likely to agree that: most people are trustful of others, most people are trustworthy and most people are basically honest.
o 59 percent of cynical shoppers were aged 25-54 vs 44 percent of trustful shoppers
o Shoppers rate corporate retailers and brands poorly in relation to putting consumer interests first (in comparison to other institutions and businesses).
o That said, 74 percent of UK shoppers agree that they want to feel good about the retailers they use, and that they want the money they spend to go to companies they trust (73 percent).
o Women were more generally more positive towards all institutions measured but even more likely to feel independents and local retailers put consumer interests first. 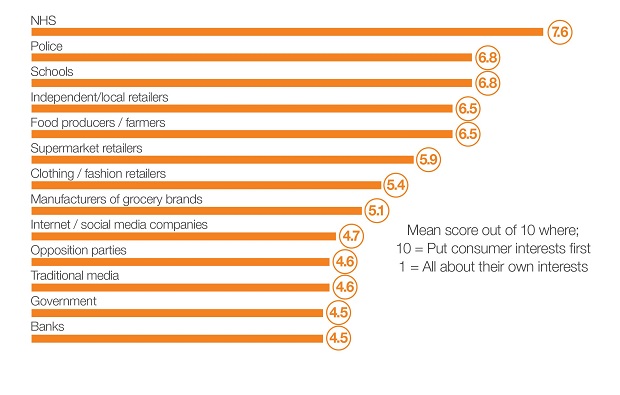 • Annoyance – key factors that irritate shoppers (based on the percentage that score 8+ out of 10 – where 10 is annoying enough to not buy that product / use that retailer):

o Topping the list with 59 percent are promotions that aren’t as good as they sound.
o In second place with 58 percent is brands that reduce their size or quality but keep the same price and in third place are retailers and brands whose changes negatively impact the shoppers, but lets them profit (55 percent).
o Products that end up being smaller in reality than a pack suggests also ranked high for irritation (52 percent).
o A lack of honesty during bad publicity also goes down poorly with shoppers – this irritated 50 percent of those questioned and retailers/brands who claim to be ethical but have dodgy practices run the risk of putting off 49 percent of shoppers.
o Other key irritants cited by shoppers included retailers/brands who are trying to be manipulative, short sell by/best buy dates, unclear or misleading contents labels and retailers who promise good service, but don’t have the staff when shoppers need them. 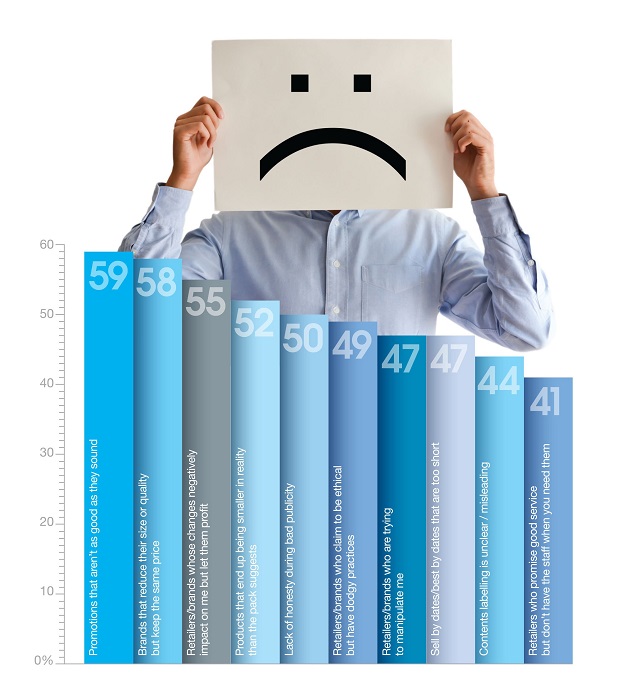 • Consequence – shoppers are voting with their wallets:

o 36 percent of UK shoppers have ‘stopped buying a brand or using a company’ because they were uncomfortable with something they did or stood for.
o Having taken a stand in relation to one brand or company, 58 percent of these ‘boycotters’ said they were more likely to do the same again in the future.
o 41 percent of boycotters were 55+ compared to 34 percent of non-boycotters.
o 55 percent of shoppers always or frequently look for products that are transparent about their contents e.g. see thru packs / clear labelling information.
o 32 percent always or frequently look for products that demonstrate their ethical policies.

Pinnington concludes: “These days if shoppers don’t like what a retailer or brand says or does, they can vote with their wallets because they have so many choices available to them. The individual irritations may seem relatively harmless in isolation, but these can create real frustration and annoyance among shoppers. To see a considerable proportion of shoppers giving such high annoyance points for so many factors should be a red flag to retailers and brands. When all else feels equal, such as price, range and accessibility, it can be the sense of connection, or not, that can lead a shopper to remain loyal to their usual brand/retailer. Or choose to go elsewhere if that connection isn’t there.

Our research implies that 1 in 3 UK shoppers have taken action – to shop elsewhere or stop buying a particular product so this willingness to act is not limited to a small minority. This is the context in which trust issues need to be viewed and unless retailers and brands understand the potential impact that trust issues – big or small – can have on shoppers, they run the risk of falling foul of shoppers who are increasingly aware, thoughtful and willing to act.”

This report is based on a national representative sample of 1048 online interviews among UK shoppers aged 18+. Nationally representative quotas were placed on gender, age, social grade and geography. Interviews were conducted in August 2017.