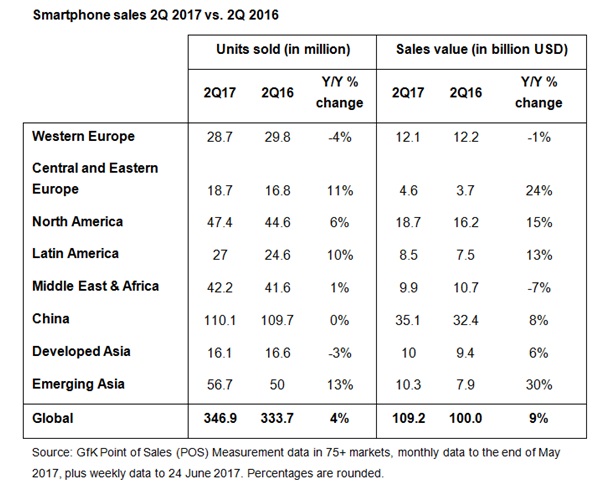 Arndt Polifke, global director of telecom research at GfK, comments, “The record demand for smartphones in the second quarter this year shows that, despite saturation in some markets, the desire to own a smartphone is a worldwide phenomenon. How that manifests itself differs widely by region. Manufacturers are maximizing all their creativity to ensure their latest devices are irresistible – and to increase ASP as a result. Elsewhere, macroeconomic factors and consumer confidence are having an impact, but operators and retailers are employing localized tactics to ensure the smartphone remains the connected device of choice.”

Central and Eastern Europe: Growing, and with a positive outlook

Smartphone demand totaled 42.2 million units, up just one percent year-on-year. The slowdown in growth is largely due to macroeconomic weakness in the region and device saturation in the Middle East. Egypt in particular is experiencing very high inflation. Demand here declined four percent year-on-year in 2Q, while GfK forecasts a fall of 10 percent in 2017. However, this is a large and diverse region and GfK forecasts its overall smartphone demand to grow five percent year-on-year in 2017. Growth will come primarily from those Sub-Saharan and South African countries where smartphone penetration is still relatively low.

In China, smartphone demand plateaued in 2Q17 at 110.1 million units, showing no change year-on-year. This moderation of growth in demand for smartphones was caused primarily by saturation in the market. However, as we’re seeing in other regions, higher-priced new products are pushing up market value. GfK forecasts smartphone demand in China to total 461 million units in 2017, an increase of two percent year-on-year. The growth in value terms (USD) is expected to be considerably higher, at 11 percent year-on-year. 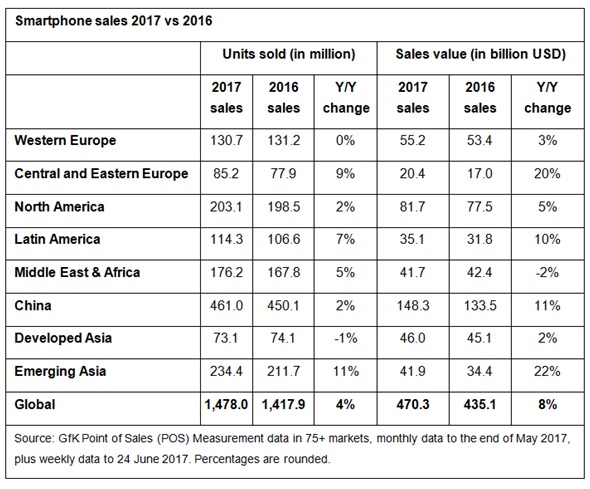 Yotaro Noguchi, product lead in GfK’s trends and forecasting division, adds, “Consumers are willing to pay more for their smartphone as they seek a better user experience. Despite the market reaching high penetration levels, GfK forecasts smartphone demand will continue to see year-on-year growth even in 2018, as innovation from smartphone vendors keeps replacement cycles from lengthening.”

GfK asked over 22,000 consumers (aged 15 or over) online in 17 countries how often they entertain guests in their home, selecting from: Every day or most days; At least once a week; At least once a month; Less often; Never.

Fieldwork was completed in summer 2016. Data are weighted to reflect the demographic composition of the online population aged 15+ in each market. The global average given in this release is weighted, based on the size of each country proportional to the other countries.