The Fast Fashion industry has grown 21% over the past 3 years, with retailers collaborating with celebs and reality stars the MOST successful brands, according to new research.

The study, from Hitwise, the UK’s leading data insights provider, reveals Lucy Meck amongst the list of celebs credited for making PrettyLittleThing one of the fastest growing fast fashion brands on the web.

Fast Fashion, a term originating from the rapid movement of styles from the catwalk to retail shelves nationwide, reflects the growing consumer demand for speed in the retail industry.

ASOS, New Look and Very are the most popular brands in this category* dominating the UK’s fast fashion market share, accounting for nearly half (47 per cent). However, the most popular emerging brand amongst the category was PrettyLittleThing.com, receiving an astounding 663% increase in people visiting its site y-o-y since 2014.

PrettyLittleThing – a brand endorsed by some of the most influential celebrities such as Kylie Jenner, Sofia Richie and Lucy Meck – is using the power of celebrity in true fast fashion to drive mass awareness quickly. In fact, from analysing search data across 3 million internet users in the UK, Hitwise found the twenty fifth most popular search term associated with the brand is: “celebrities wearing Pretty Little Thing.” 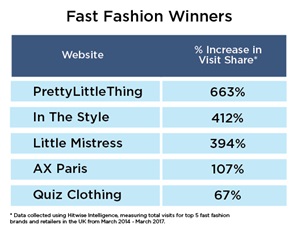 Other brands also entering the fast fashion industry with evident success includes In The Style – a brand with attributed clothing lines to reality stars, E4’s Binky Felstead, MTV’s Charlotte Crosby and ITVBe’s Billie Faiers. Recently achieving a multi-million pound investment injection, In The Style’s key to success is speed and celebrity, it launches new collections every four to six weeks and lists 200 new items each week.

As well as brands borrowing influence through celebrity partnerships, celebrities are also making their way in the fast fashion world, creating their own fashion lines and in turn, becoming their own brands. Millie Mackintosh is a prime example of a reality star who has evolved from an onscreen celebrity to behind the scenes fashion designer. Through capitalising on her success, she has been able to reach audiences on and off screen with her line of clothing.

Hitwise found that the 30 per cent of the top 20 search terms around Millie Mackintosh were directly associated with her clothing line.

Nigel Wilson, Managing Director at Hitwise, says: “The Fast Fashion industry has witnessed a shift over the past few years as increasingly online retailers enter the market in such a short space of time. Retailers collaborating with celebrities become associated with the people most influential to their customers, and in turn, monopolise on a pre-established customer base, as witnessed by PrettyLittleThing’s incredible growth in the past year.  The importance of influence for this audience demonstrates the power of partnerships and celebrity endorsements, proving fashion trends aren’t only made on the catwalk.” 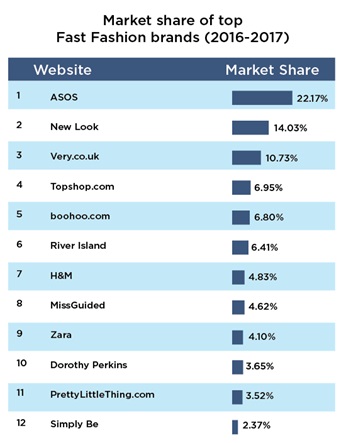 Hitwise sources data from a range of panel providers which allows the monitoring of three million people across the internet, within the UK on a daily basis. The internet behaviours are sampled and weighted using algorithms to be representative of the entire UK population.