TV accounted for 93.8% of video ads viewed in the UK in 2016, representing 18 minutes and 53 seconds a day watching commercials, according to new research.

The study new figures from Thinkbox, also indicates that this number is much lower for younger adults aged between 18-24.

This figure is a slight decrease from 2015, where TV’s share was 94.4%, but is still significantly higher than all other forms of video advertising.

Overall, the average person in the UK watched 20 minutes of video ads a day in 2016.

Meanwhile, total video consumption increased year-on-year from an average of four hours, 35 minutes a day to four hours, 37 minutes. TV accounted for 74.8% of UK video viewing in 2016, compared with 76% in 2015.

The analysis also shows that:

The average person in the UK watched 20 minutes of video advertising a day in 2016. TV advertising accounted for 93.8% (18 minutes, 53 seconds a day), compared with 94.4% in 2015. TV advertising is watched full screen, regardless of the device it is watched on, and most likely with the sound on. 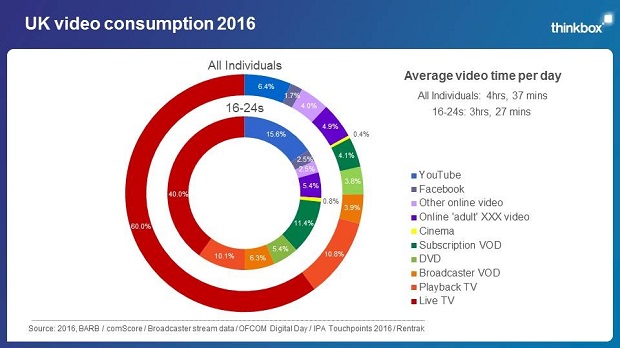 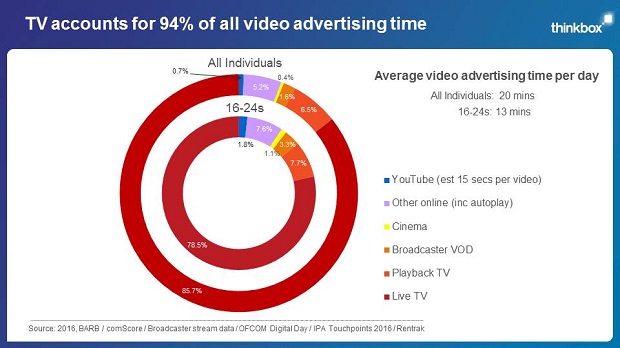 Other forms of video advertising break down as follows:

“The available data clearly shows that TV is the pre-eminent form of video. However, scale is only one part of the story. An analysis like this can’t include things like relative quality and trust, the amount of premium content different video have to offer and, ultimately, advertising effectiveness. In these areas too TV stands out.

“TV is a trusted, high quality environment for advertisers that is proven to work. It has a huge variety of premium programming across every genre and can satisfy the demands of many thousands of advertisers simultaneously and for the long-term. Now more than ever these are crucial distinctions between it and a lot of other types of video.”

Recently released figures show that TV ad revenue in the UK totalled £5.28 billion in 2016, up 0.2% on 2015, according to full year revenue figures provided to Thinkbox by the UK commercial TV broadcasters. This represents the seventh consecutive year that TV advertising revenue has grown in the UK. The figure represents all the money invested by advertisers in commercial TV across all formats and on every screen: linear spot and sponsorship, Broadcaster VOD, and product placement. Online businesses invested a total of £639 million in TV, an increase of 8% on 2015, to become the largest category of advertisers on TV.