The Oscars’ are now most expensive TV buy after Super Bowl with number of commercials soaring, generating $115m in ad revenue, according to new research.

As ABC and marketers prepare for the 89th Academy Awards ceremony on February 26th, the awards show continues to dominate its rivals the Grammy’s and Golden Globes, pulling in $115 million in ad revenue last year. And with both commercial load and the cost of a 30 second spot continuing their long term trend increases, the show is likely to continue its dominance, despite recent political controversies regarding diversity at the Oscars, a rise in political speeches at awards show podiums, and concerns about declining live audiences for awards shows.

Kantar Media has mined its extensive database to compile key figures on Academy Awards advertising. Significant trends include higher ad prices and revenue; rising ad volume that is diminishing the event’s advantage versus other programming; and an influx of first-time advertisers. Advertisers are also using regional TV buys to circumvent exclusive-sponsor arrangements in the network telecast. Finally, product integrations are creeping into the awards ceremony itself and giving a few marketers the opportunity to “brandjack’ the social media discussion during the live broadcast.

The Price of Advertising Is Trending Upwards

In 2016 the average price of a 30-second spot in the Academy Awards was $1.72 million. Although this was down 6 percent from the previous year, the long term trend has been upwards. For 2017 the average cost for a 30 second ad is expected to be $1.9 to $2.0 million.
.
What drives such high pricing? Ratings for the ceremony vary from year to year and swings of as much as 10 percent are not uncommon. But even in years when ratings slip, the Academy Awards still attracts one of the largest audiences in all of television and this contributes to the premium cost. As seen in Kantar’s FragmentNation study, an increasingly fragmented media landscape makes opportunities for audiences to reach a large and diverse audience particularly valuable.

Another factor is the expanding use of analytic techniques powered by big data, which enable marketers to identify and value high-quality audiences. In addition, the event generates strong second-screen engagement in social media, which is also attractive to marketers.

Ad revenue has been increasing at a faster pace than spot pricing because there is more inventory for sale. In 2016 sponsors paid $102 million for messages in the awards show, a slight decline due to the decrease in ad rates. When the pre-ceremony Red Carpet coverage is included, the grand total jumps to $115 million. Oscar Sunday perennially generates more ad revenue for ABC than any other day of the year. 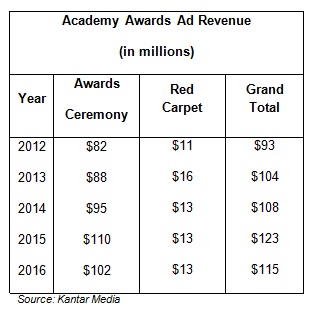 The Oscars Win the Gold

The Academy Awards, Grammy Awards and Golden Globes are the top three awards shows on broadcast television and occur within weeks of each other. The Academy Awards commands a significantly higher advertising price and produces more revenue than its rivals.

The Academy Awards has a reputation of being relatively uncluttered by commercial messages. That was truer a decade ago than present day. The total amount of network ad time has increased by a staggering 45 percent from the levels of 5-10 years ago, reaching an all-time high of 45 minutes, 10 seconds in 2016. 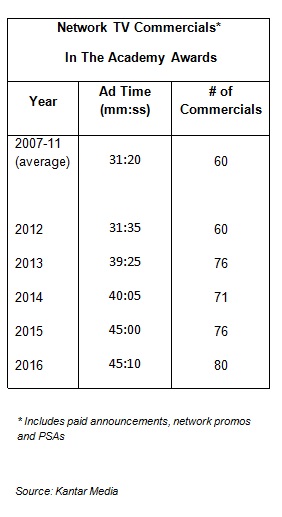 Two-thirds of the ad time increase is attributable to more promotional messages from ABC. Paying advertisers have been responsible for the other one-third.

In addition to the spots sold by ABC, the telecast contains 7-8 minutes of ads inserted by local affiliates for a total commercial load of 52-53 minutes. This is equivalent to 14-15 minutes per hour for a 3 ½ hour live telecast. As a reference point, the comparable figure for the 2017 Super Bowl was 15 minutes per hour. The typical range for prime time entertainment programming on broadcast and cable networks is 17-20 minutes per hour.

The largest advertising positions in the Academy Awards are held by well-known marketers. In a typical year, the top five spenders account for 55-60 percent of total ad revenue. And because of long-term sponsorship deals, the makeup of the group changes slowly over time.

For 2017, Walmart has replaced Kohls as the exclusive retail category sponsor. Kohls held its sponsorship for just one year, having taken over from JC Penney in 2016.

The combination of limited commercial time and marketers with guaranteed category exclusivity results in a relatively small number of companies appearing in the Academy Awards. However, there is turnover and recent years have seen an influx of new sponsors eager to capitalize on the event. In 2016, first-time advertisers accounted for 24 percent of the Academy Awards lineup.

The debutantes in 2016 were General Electric, Kohls, LinkedIn, Quicken Loans and Squarespace.

While most attention is focused on the national TV commercials appearing in the Academy Awards, each ABC affiliate also has some commercial inventory it can sell. This air time offers another way for sponsors to access the event, albeit on a market-by-market basis.

For many years, ABC has sold the automotive category exclusivity to a single company, typically for five year periods. (General Motors currently holds the rights). This has prevented rival manufacturers from airing national spots in a program they would otherwise jump into. For perspective, the Super Bowl does not have an exclusive auto sponsor and seven different auto companies bought time in the 2017 game.

This leaves local markets as the only access point for other auto companies to reach viewers with messages. It’s a very popular strategy. Across the Top 100 markets, auto accounted for 27 percent of all local ad time in the 2016 Academy Awards. Auto ads appeared in 94 of the 100 markets and the average market had competing messages from four different brands. Eight different category advertisers ran spots in at least 15 of the Top 100 markets.

Other advertisers also executed a regional TV strategy with scale. Comcast promoted its Xfinity cable television service in 40 of the top 100 markets, covering a significant proportion of its service area. American Family Insurance ran spots in 22 markets and Walmart in 16 Southeast and Midwest markets. Walmart messaging was focused on mobile phone plans and was a regional counter to AT&T’s national advertising in the Academy Awards.

During the Academy Awards coverage, millions of people log on to their social media accounts and participate in or just eavesdrop on the digital conversations about the event. Many advertisers with paid spots in the TV broadcast design and execute second-screen strategies in an effort to convert social discussion into brand interactions. The competition for online attention is tough because so much of the audience interest and discussion is about the content of the show itself – e.g., the celebrities, the award winners and their acceptance remarks, and the entertainment pieces interspersed through the event.

Against this background, the integration of branded products into the content of the awards ceremony has become a stealth tool for marketers to generate huge levels of exposure and social media interactions and to “brandjack” attention from other sponsors. It’s a limited practice because effectiveness depends in part on the elements of surprise, distinctiveness and being organic rather than obviously commercial.

• Lego (2015) – During a performance of the song “Everything Is Awesome” from The Lego Movie, replicas of the Oscar statue made from Legos were handed out to prominent celebrities in the audience.

It remains to be seen whether the 2017 Academy Awards will contain any branded integrations.