A decade on from their creation, mobile apps usage is growing more than ever, according to new research.

The research, from Flurry, indicates that overall app usage grew by 11% and time spent in apps grew by 69%, compared to 2015.

• Social and daily habit apps dominated time spent on mobile in 2016.
o Time spent in social and messaging apps grew by 394% over the last year.
o Business and finance (up 43% in time-spent) and sports (up 25% in time-spent) apps also saw growth because they are intrinsically centered around mobile activities and rely on real time data.

• Phablets continue to dominate, capturing 41% of market share.
o While we predicted small phones would become extinct in the last year; with 1% market share, the end is near.

• The decelerating rate of growth could signal market maturity, saturation or simply the end of the app gold rush.
o App developers need to work double time into the next decade and focus on which industry to disrupt, again. 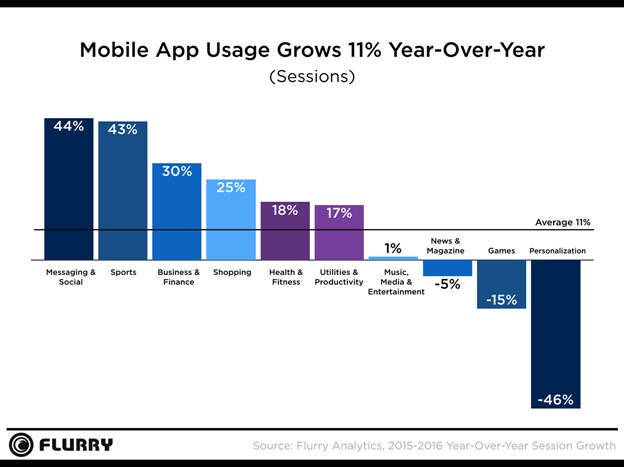 Over the last year, the Flurry footprint grew to track more than 940,000 applications, across 2.1 billion devices, in 3.2 trillion sessions. In this context, we define app usage as a user opening an app and recording what we call a “session,” as well as the amount of time spent in the application.

Compared to the year prior, overall app usage grew by 11% and time-spent in apps grew by 69%. In previous years, we saw all app categories growing in tandem; however, this year the story is different. After shifting the web and television to the rearview mirror, mobile apps started eating their own, with session and time-spent growth in some app categories occurring at the expense of others. While Messaging and Social applications drove year-over-year session growth at 44%, the Personalization category gave up a staggering 46% in session usage. This steep decline in usage can be attributed to diminishing value for users of these products.

When we looked into 2016’s most notable categories, here’s how time-spent trends shook out: 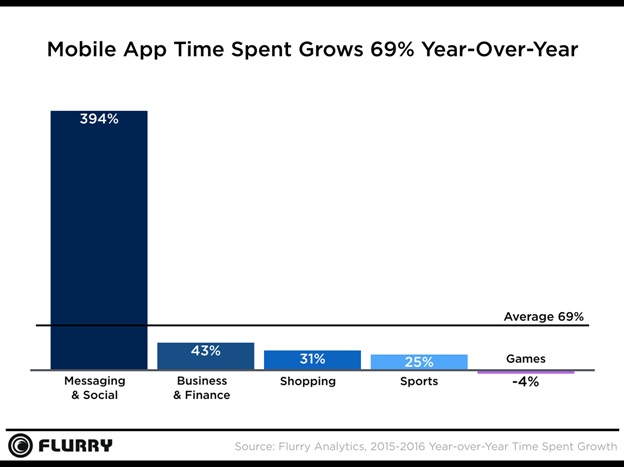 2016: The Year Social Ate Media and Telcos: Time spent in Social and Messaging apps grew by an astounding 394% over the last year, proving to be the driver that helped mobile achieve its year-over-year time-spent growth of 69%. This is a result of consumers using their social and messaging apps as their voice and video calling utilities, as well as the phenomenon we call Communitainment. With news and magazines sessions down 5% and Music, Media and Entertainment up only 1%, it’s safe to say that Social has absorbed the media industry.

Sticky Apps Tied to Daily Habits: Business and Finance (up 43% in time-spent) and Sports (up 25% in time-spent) categories were immune to growth decay because they are intrinsically centered around mobile activities and rely on real time data. We anticipate further growth in these categories as users continue to shift daily habits away from traditional media channels, i.e., watching live sports, market reports and the morning news on their TVs, to the apps on their phones.

Video Killed the Gaming Star: Gaming, the app category formerly known as “the darling of the mobile industry,” saw time-spent decline by 4% year-over-year. Users are increasingly comfortable paying their way through games, with the mobile gaming industry seeing a strong increase in revenues according to Apple’s latest App Store report. Additionally, gaming remains a hit-driven industry. This year’s first “hit”, Pokemon Go, faded relatively fast, as consumers lost interest in the game, only returning for marquee holiday events. Another notable hit, Super Mario Run, was released too late in the year to make a difference for the overall engagement numbers.

Shopping Apps Spell Doom and Gloom for Retailers: It was hard to miss the disappointing post-holiday news from major retailers. However, the story is quite different in the mobile retail world. Shopping apps grew 31% in time-spent. A report by Adobe shows a very healthy growth in online sales, with Amazon grabbing 38% of holiday sales transactions from November 1 through December 29, 2016. This growth significantly benefited from mobile and its apps, which, unlike the desktop, have captured impulse buys. 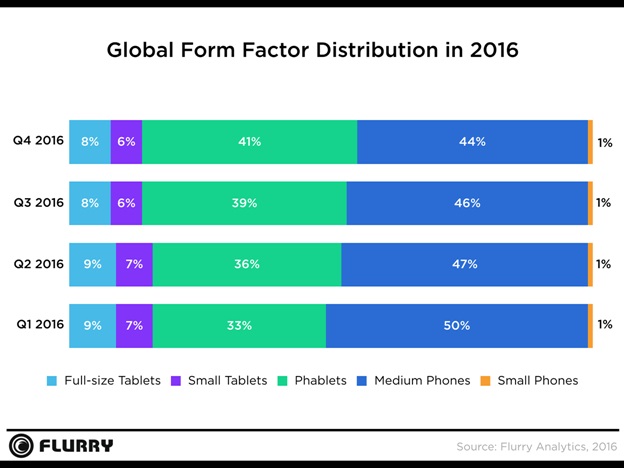 As forecasted in last year’s report, we have seen phablet devices becoming the dominant form factor across the globe, capturing 41% of market share. While our prediction didn’t completely come to fruition, users continue to find value in the larger screen size. This directly correlates to the growth in media consumption and social engagement app categories. As less mature smartphone markets adopt larger phones, Phablet share will continue to eat away at medium phones and completely eliminate small phones.

As the iPhone celebrates its first decade, the mobile industry has grown into a dog-eat-dog world. The decelerating rate of growth could signal market maturity, saturation or simply the end of the app gold rush. But let us put things in perspective. The gold rush in California ended in 1855. A lot of wealth has been generated since then. We are excited to see what app developers do in the next decade and which industry they chose to disrupt, again. Whatever it is, we will be by their side, providing a bit more than picks and shovels.