Facebook drove 90% of all interactions and 60% of all views of Christmas TV adverts on social media in the UK, compared to just 40% of views on YouTube, according to new research.

This year’s TV ad campaigns took us by storm in November, but who won on social this year? Social media analytics firm, Socialbakers, analysed 10 of the most-talked-about Christmas adverts of 2016 to identify the platform that works hardest for brands, and which brands are using social best.

• 90% of all interactions and 60% of all views of Christmas TV adverts on social were via Facebook, while just under 40% of views were on YouTube

Socialbakers also found that great Christmas content can buck the trend of pay to play on Facebook. The top three performing brands in terms of both views and interactions – John Lewis, Marks & Spencer and Waitrose – relied solely on organic reach.

However, brands competing with the big guns are using paid to their advantage. While Boots, Aldi and Tesco are not the biggest names in the Christmas ad space, by boosting the right content they beat Sainsbury’s for total interactions and views on Facebook. 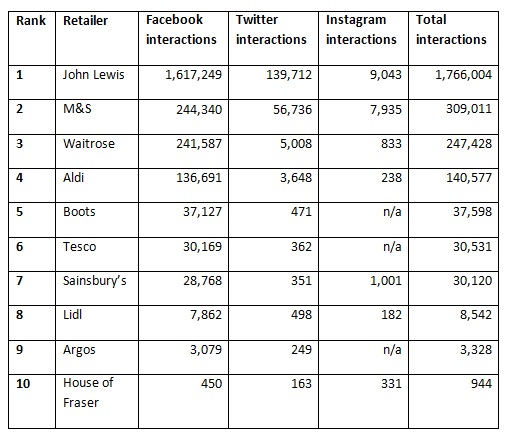 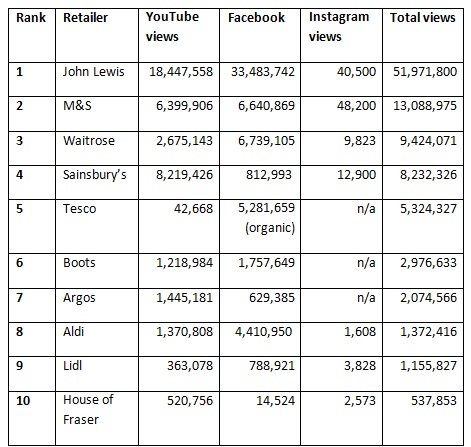 For all brands, the first two days of a video being live generated the lion’s share of interactions on Facebook before dropping significantly. Meanwhile, content on YouTube continues to drive views throughout the month following the launch, demonstrating how YouTube maintains its position as the go-to video platform for users to discover video content.

Even the biggest brands can’t rely on a single video to maintain momentum forever and it’s vital to have a content plan to follow up the initial hero piece. John Lewis, which achieved the highest levels of interaction and views on Facebook, waited 10 days before following up with a video montage of dogs bouncing along to the video. This resulted in a second spike of 26,931 interactions.

In contrast, Aldi and Boots have been far more consistent in posting follow-up content that has maintained momentum and driven high levels of engagement with their audience. For example, Aldi used the John Lewis ad launch to its advantage, creating a comedic skit of #KevinTheCarrot reacting to the advert which drove 63,257 interactions and almost 2 million views. Meanwhile, Boots has continued to seed stories of those working on Christmas day, which have prompted spikes in interactions throughout November.

Moses Velasco, Chief Strategist at Socialbakers, discusses what marketers can do to maximise the impact of their Christmas campaigns on social:

1. Spread cheer with something fun – whether it’s festive sweaters (a la Gourmet Burger Kitchen in 2015), Christmas quiz’s or a twelve days of Christmas countdown giveaway – build on the initial interest in your video campaign with content that continues to engage your audience

2. Use influential hashtags as opposed to creating custom ones. Word of mouth travels faster on social than through traditional channels and by picking popular hashtags brands can make sure that their message reaches more people and taps into popular trends

3. Spend wisely – put your budget behind content that’s proven to have an impact and if, like John Lewis, you know your content will do well organically, hold off from spending budget unnecessarily