With exactly one month to go until England and Wales’ opening matches at Euro 2016, new research reveals the huge degree to which people will be second-screening during matches to enhance their experience of the tournament.

The study, from RadiumOne, indicates that 60% of fans will share Euro 2016-related content online – a goldmine for marketers

The data shows that two-thirds of Britons who’ll watch the 2016 European Football Championships live on TV will use an internet-connected device at the same time.

Reading online comments or using online chat/IM about the match they’re watching (both 28%) are the most popular second-screening activities, followed by phone calls (25%) and posting comments on social media (24%) about what’s on. One in five (20%) second-screeners will search online for information relating to the match while 18% will search for related videos.

Smartphones will be the most popular device among second-screeners (73%) followed by laptops (64%) and tablets (60%). 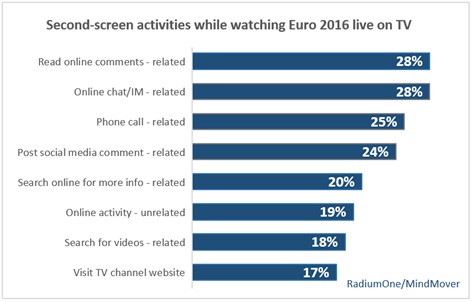 “Euro 2016 will be a second-screen fest which gives brands a sustained series of ‘moment marketing’ opportunities if they can connect second-screen usage to key moments, be it goals, scores or dodgy refereeing decisions,” says Rupert Staines, RadiumOne’s European Managing Director. “Ads, for example, can be synced with these moments and delivered to multiple connected devices with a similar profile to the TV audience. It’s about using technology to take a TV moment and extend the audience reach of the ad in real-time for better engagement and ROI.”

Staines adds: “In addition, brands sponsoring players or teams can make sure online ads are served when their game is broadcast – either live or during highlights shows – to reinforce the message. So, Nike should be timing their Wayne Rooney ads to coincide with England games as should Subway who sponsor Daniel Sturridge.”

Nearly nine-in-ten (87%) sharers will share content in ‘dark social’ – that is, outside of social networks on email, instant messenger and forums – whilst 37% will only share Euro 2016 content this way. Staines says: “The best way to unlock ‘dark social’ is via sharing tools such as URL link shorteners and the sharing widgets around articles.” 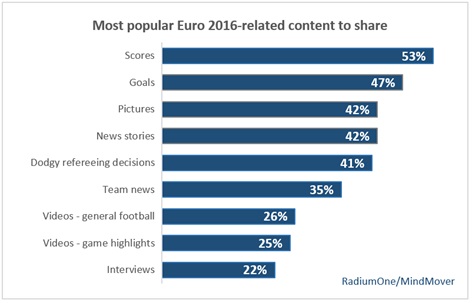 “The explosion in sharing football-related content online is a potential goldmine for marketers as it indicates a strong degree of real-time intent that can be used to enhance real-time campaigns, particularly programmatically,” says Staines. “For example, questionable refereeing decisions will be heavily shared and tailor-made for a brand associated with eyesight, such as Specsavers, or decision-making, such as online take-away platforms like Just Eat and Hungry House, who could identify people interacting with this type of content and send them related messaging.”