The Sun has published its first website traffic figures for two years, indicating that it is the least visited UK national newspaper website- suggesting its paywall has resulted in a big drop off of users for the UK’s best selling print newspaper.

The latest online figures from the Audit Bureau of Circulations show that the Murdoch-owned publication remains some way behind its rival the Mirror online, as the Telegraph, Mail Online and theguardian.com make gains.

Overall, the Sun attracted 792,994 unique browsers on average each day in June- compared to 14 million plus from online leader The Mail Online.

Sun editor David Dinsmore said: “Although we are very much at the start of putting selected content outside of the Sun+ subscription, we are seeing some good early traffic and we anticipate that numbers will continue to rise.

“Our exclusives on the historic photos of the Queen and Lord Sewel’s drugs shame as well as our brilliant real life stories and Dear Deidre agony aunt letters, have ensured that the Sun’s online content sets the agenda.”

Despite being the best-selling daily newspaper, the Sun’s online readership remains far behind its rivals.

Mail Online remains the most read newspaper website online, with more than 14 million unique browsers, up 4.7% on June, while theguardian.com increased its audience by just over 3% to pass 8 million.

During July, the Telegraph attracted more than 4.5 million browsers a day, overtaking the the Mirror group’s national titles after an 11% increase in visitors.

The growth at Telegraph.co.uk was the most rapid among all the national titles except for the Richard Desmond owned dailystar.co.uk and express.co.uk, which saw increases of 33% and 29% respectively.

The two titles still have a lot of catching up to do, with the Express attracting 1.3 million browsers a day and the Star’s audience just nudging over the 1 million mark for the first time. 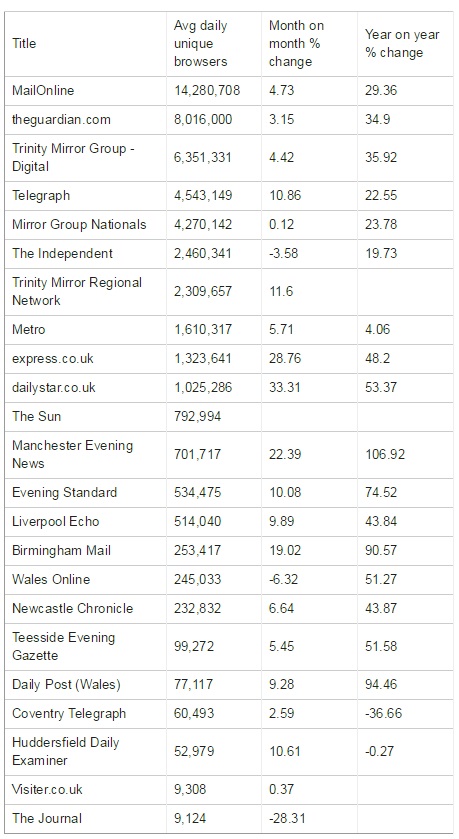