Facebook may be the most popular social network in the world, but CEOs of big companies are taking to Twitter to write their views, according to a new report.

The survey, conducted by PR firm Weber Shandwick, indicates CEOs from the world’s 50 most lucrative companies prefer Twitter and LinkedIn, and the number has increased compared to last year, leaving Facebook behind.

It found that 10 percent of those CEOs are on Twitter, up from just two percent in 2012.

LinkedIn was the most popular network, with 22 percent of CEOs on the platform, up from just 6 percent in 2012.

But the study found that none of the CEOs have active, public Facebook pages. In 2012, 10 percent of the CEOs in that category were using Facebook.

In 2012, around 10% of CEOs in the category were using Facebook. Leslie Gaines-Ross, Weber Shandwick’s chief reputation strategist, expects these figures to rise in the future and referred to the current numbers as a blip.

Shandwick said that a few years ago, there was a common belief that CEOs should be active across all major platforms to do their job properly. However, now CEOs are more aware of what platform will serve their purpose now.

Leslie Gaines-Ross, Weber Shandwick’s chief reputation strategist, said that she expects that number to increase in the future (it can’t get any lower) and referred to it as a “blip.”
“There was a sense two to three years ago that CEOs had to be on every platform to be doing their job properly,” she explained. “Now I think that CEOs are identifying which platform really works for them. … I absolutely [see that number going up].”

The study, which concluded that Facebook has lost its appeal among CEOs, also mentioned that more CEOs are participating in company videos, acknowledging them as an important tool for making a marketing strategy.

Over half of the CEOs who agreed to this have appeared on their company website or YouTube over the last year, which is an increase from 40% in 2012 and just 18% in 2010.

The study also found that only 28% of these CEOs have public social media accounts irrespective of the platform. 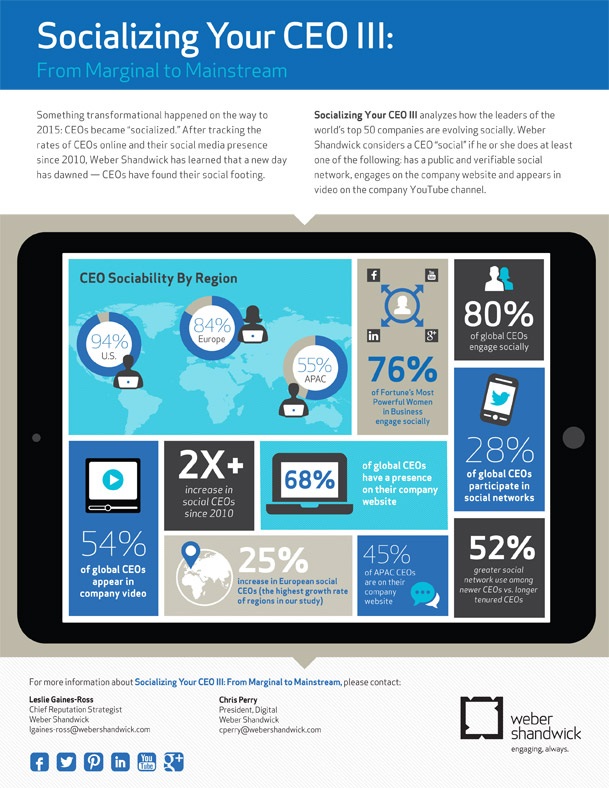