As the UK general election looms, the SNP has the best performing website while UKIP and Labour are lagging behind, according to new research.

The study, from Dynatrace (formerly Compuware APM) looked into how each of the main UK political parties are faring in the digital arena ahead of next week’s general election.

Key findings from the analysis reveal:

• Perhaps mirroring the general sentiment over its performance in the TV debates, the SNP is the clear front-runner when it comes to digital performance

• UKIP has the slowest website overall, with users waiting an average of nine seconds for the homepage to load – that’s an eternity in 2015!

• Labour is feeling the heat –the site collapses entirely almost a quarter of the time! There’s some major issues with the way its site has been built

Using its Synthetic Monitoring solution, Dynatrace has been tracking how well each of the Conservative, Labour, Liberal Democrat, UKIP, Green and SNP party websites have been performing throughout the month ahead of the election.

“Digital technology has infiltrated every aspect of our lives, from socialising, to shopping and banking and politics is no different” said Michael Allen, Solutions VP, Dynatrace. “This year’s general election is being fought on the digital battleground like no other before it. As voters try to decide on which way to go in the run-up to the election, they will be turning to the web to stay abreast of all the latest information on party mandates, politicians’ promises and those all-important election gaffes.

“It’s no surprise then that each of the main political parties have an online presence, giving them a direct line through which they can try to win those essential votes. However, first impressions on the web really do count; so in the run-up to the election, you’d expect the party sites to be optimised to deliver the very best user experience. It should be as important for a political party to be the fastest and the smartest in reaching out to the electorate as it is to a bank or an online retailer to conduct a transaction swiftly and neatly.”

Dynatrace Synthetic Monitoring is being used to run hourly automated tests that simulate what happens when somebody tries to access each party’s website. The tests are conducted from real-user locations, rather than from data centres or internet backbones, giving a true and accurate representation of what voters are experiencing when they try to visit the sites from home. This provides insights on how those responsible for digital channels could optimise and refine the design of their websites to improve the experience for users, whilst benchmarking each site against its competitors. The metrics being measured include the average length of time it takes for each website homepage to load, and the reliability of each site, based on how often it loads successfully.

Looking at the average page load time (Fig.1.), the SNP emerges as the clear front-runner in the digital performance polls. The SNP website takes just over three seconds to load on average, making it nearly twice as fast as Labour’s site, which won second place with a six second load time. UKIP lagged firmly behind the others, with its homepage taking an average of nine seconds to load throughout the tests. 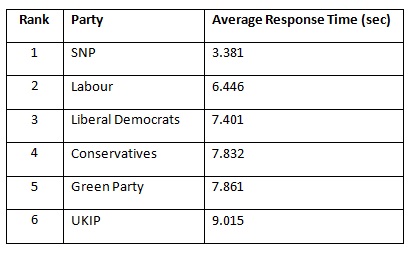 However, whilst labour came in second place in terms of load times, availability (Fig.2.) paints a very different picture; in fact, Labour sits at the bottom of the table here, with just over 77% availability. This is compared to the remaining parties who all maintained above 95% availability for their websites. This really highlights that there are some serious design-flaws causing the Labour website to fail to load for nearly a quarter of those trying to access it. 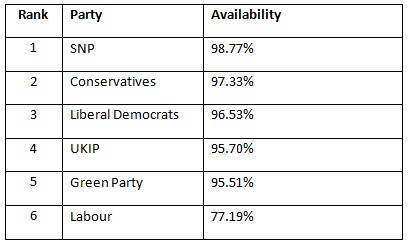 “Digital performance and digital optimisation have rocketed up the agenda as consumers, and voters in this instance, have come to demand faster and better online experiences,” Allen continued. “These days, it’s not enough just to have a website, users expect them to be flawless and they’re very unforgiving if they aren’t. Slow loading pages can quickly lead to frustration and cause visitors to click off and go to a competitor for the information they need. It’s a little surprising that there’s such a divide between the parties’ digital performance so close to the election; you’d expect to see a lot more effort going into optimising the user experience given how important each and every vote is going to be this year.”