The latest Advertising Forecast from research group Strategy Analytics predicts that nearly £8bn will be spent on digital advertising this year.

The UK is now on track to become the first among 25 countries monitored by Strategy Analytics where spending on digital advertising surpasses all other traditional formats combined, marking an increase of 9.5 per cent, compared with 1.6 per cent for traditional advertising.

Despite the focus on digital, total TV advertising revenue in the UK increased by six per cent in 2014, reaching a new record after five consecutive years of growth. TV advertising spend is also set to grow again in 2015 by 5.5 per cent. 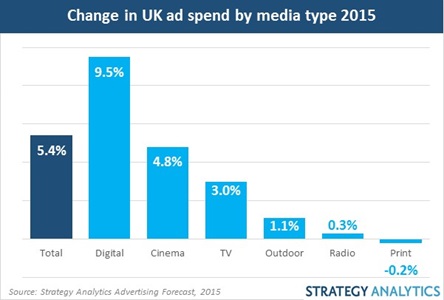 As more shoppers turn to digital devices for shopping and spend their time constantly plugged in, it is time for broadcasters to engage these consumers with smart advertising technology before they become left behind by the digital world.

Dan Wagner, CEO and Founder of Powa Technologies, believes that smart advertising is crucial when trying to engage customers today.

He said: “Smart advertising is the key to broadcasters avoiding obsolescence, enabling viewers to immediately interact with adverts in real time directly, unlocking rich customer engagement opportunities as the ad is playing, rather than leaving it to chance that they will remember later.

“Brands are flocking to digital advertising because it offers a level of interaction and accountability not seen in other more passive mediums. Broadcast has long guaranteed a huge mass audience, but businesses are effectively walking in the dark, with only the loose correlation of viewing figures and sales uplift to go by when judging ROI.”

Television is still the biggest advertising sector globally and this year the UK will spend around £3.8bn (almost a quarter) on television ads, compared to £2.5bn on print, £910m on outdoor and £492m on radio. Cinema is the second fastest growing ad format in the UK, but only accounts for one per cent of the total market. Digital ad growth will be driven predominately by mobile (23 per cent), social media and video (both 18 per cent).

The total UK advertising market is expected to grow by 5.5 per cent to £15.8bn, almost two-thirds faster than in the US and the rest of Western Europe.

With UK smartphone penetration at 62 per cent, the majority of viewers will now have a smart device close at hand providing the ideal opportunity for retailers to actively connect with them through broadcast. By taking this opportunity to engage with consumers, retailers would be able crack a whole new audience and revenue.

Dan adds: “Brands are no longer willing to spend millions of dollars on advertising campaigns if they are unable to effectively measure the results. By creating interactive smart ads, broadcasters will be able to combine their huge reach with the visibility of digital campaigns, enabling the medium to retain its spot as the leading platform.”